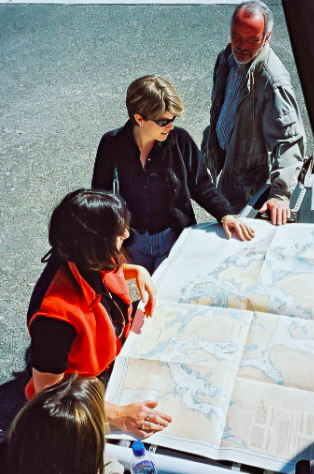 In 1991, Ecotrust, an American charity based in Portland, Oregon, was established with the purpose of developing a conservation-based economy in the Pacific Northwest. Founder, Spencer Beebe, set out to work with Indigenous people in the world’s largest intact coastal temperate rainforest, located in northwestern BC. He soon realized that he needed a Canadian partner organization and, in 1994,  asked one of his Canadian Ecotrust board members, Jacqueline Koerner, to take the lead on founding Ecotrust Canada. Jacqueline became Founding Chair and soon environmental journalist, Ian Gill,  became the organization’s first executive director. In 1995, Ecotrust Canada received charitable status, marking the beginning of its journey toward building resilient economies in rural, remote, and Indigenous communities.

Ecotrust Canada’s early work focused on forming strategic partnerships with coastal communities and growing an “information democracy” by providing the tools needed for communities to make informed decisions on development. The work focused heavily on using geographic information system (GIS) technology to map data that included scientific, economic, and traditional Indigenous knowledge. Ecotrust Canada trained and mentored Indigenous and non-Indigenous communities across BC to use GIS technology, and helped build local infrastructure and systems for carrying out research, analysis, and planning.

To foster the growth of a conservation-based economy, Ecotrust Canada developed the Coastal Loan Fund to support small-scale entrepreneurs with businesses that had an economic, social, and environmental benefit, or a triple-bottom-line. Over 10 years, the program offered 87 loans worth $10.7 million to entrepreneurs, who then leveraged another $40 million in loan capital, while creating approximately 900 jobs. The fund closed in 2009 and Ecotrust Canada produced a ground-breaking analysis of how this bold experiment in social finance for the BC Coast both flourished and failed.

With the financial crisis of 2008 challenging economies across the world, Ecotrust Canada narrowed its approach in an effort to develop strategic focus. With one of the world’s leading resilience theorists, Dr. C.S. (Buzz) Holling, on the board, Ecotrust Canada pursued economic, ecological, and community-based solutions through “safe-fail” innovations. These were specific on-the-ground projects, that if found successful, could be brought to scale and impact wider systematic change. Some of these opportunities included: a small-boat scaled monitoring technology and support program based in Prince Rupert; alternative forest management for carbon offsets and harvesting in the Cheakamus Community Forest; and a seafood traceability program.