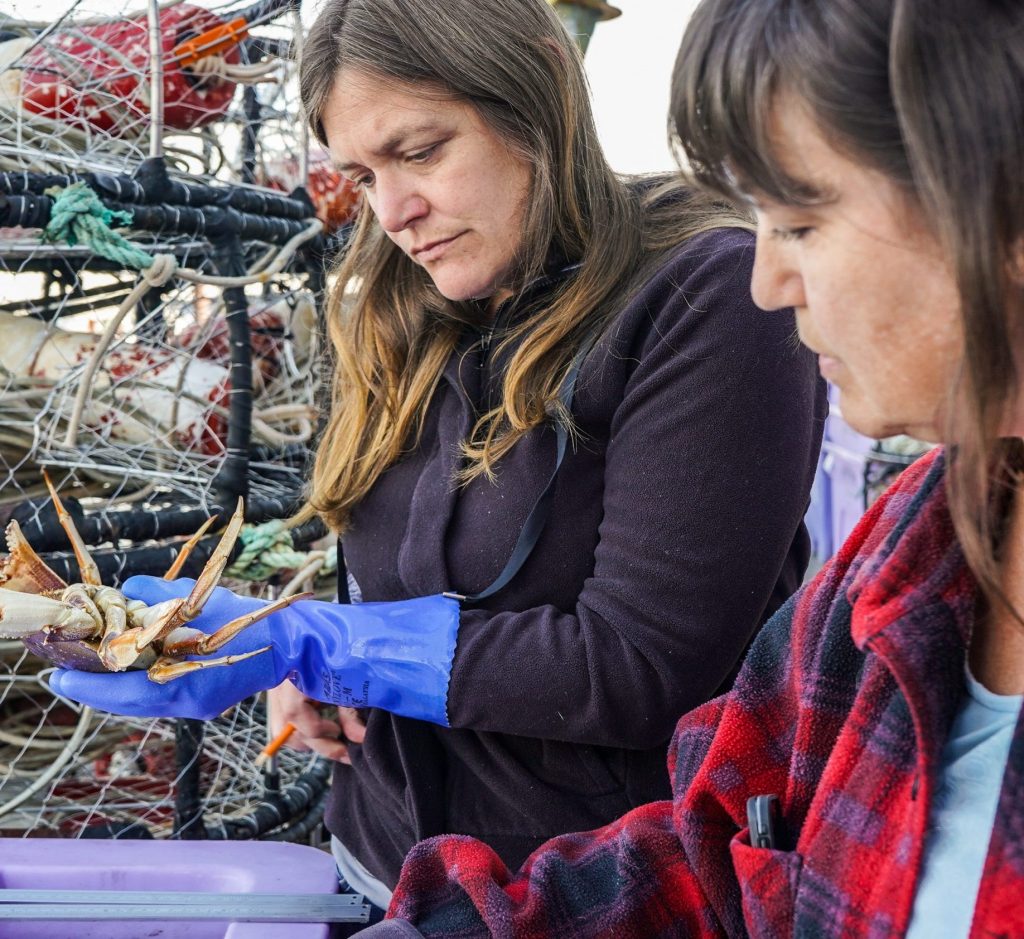 By Dianne Villesèche, one of our Fisheries Project Managers based in Prince Rupert, B.C. After returning from Ecotrust Canada’s first biosampling trip of the season, she shares from her perspective what it’s like to be an at-sea observer with Area A crab fleet.

As I arrive at dock to board the crab boat Sea Harvest, the skipper is using the crane to load bait and groceries needed for the week. The crew is on deck guiding the containers over and unpacking supplies. I’m super excited, the weather’s great and I’m joining them for a week-long crab biosampling trip in the Hecate Strait. After asking permission, I hop on board and look for spots to store my gear while staying out of everyone’s way as they rush around in preparation to leave.

Ecotrust Canada has provided sustainable and economically viable services for the Area A Crab Fishery for the past nine years. This work is a perfect fit with our mandated vision of supporting community-built solutions that result in more sustainable fisheries.

Four times each year, as per the requirements of the Area A Crab Management Plan, our team conducts biosampling trips aboard vessels within the fleet. The crab data collected is used by Fisheries and Oceans Canada (DFO) in support of compliance, science, conservation, and management activities. In addition to data collection, we also offer at-sea observer training, such as salmon and crab, which helps build local fisheries knowledge and capacity.

As a former commercial fisherwoman in the 80s, I welcome the adventure this work presents to get out of the office and into the field… a little bit of nostalgia for days gone by. When the seas are calm and the sun is shining, the work is extremely enjoyable making the tougher days worthwhile, when you are dealing with rough seas, mountains of paperwork, a cranky crew, pinching crabs, wet clothes, and stinky rain gear. 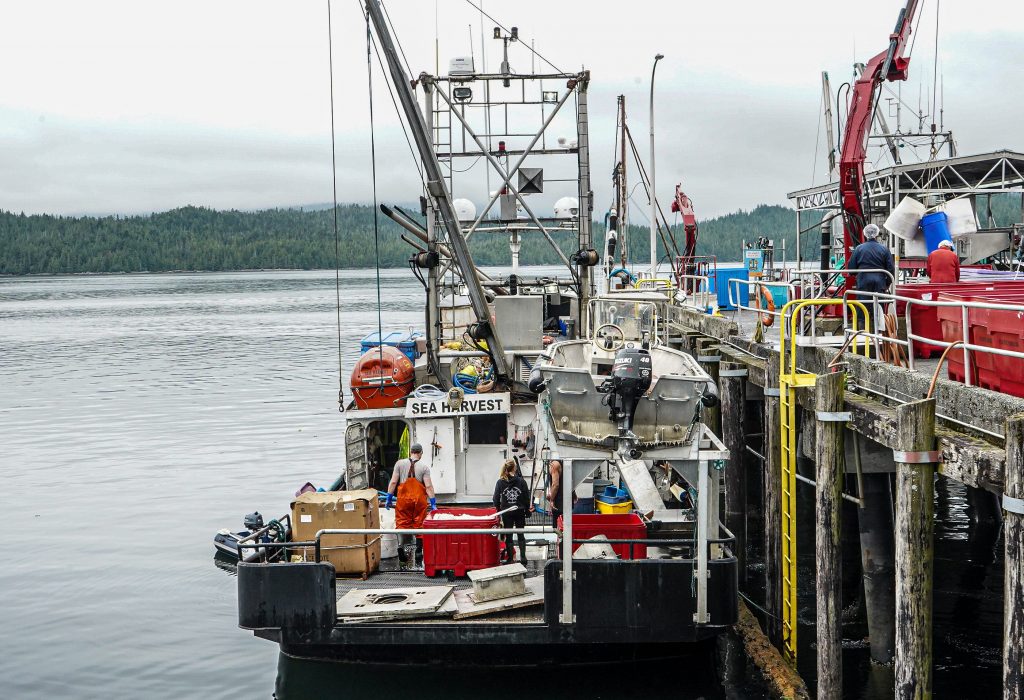 Such was my time on the Sea Harvest, mostly enjoyable with a splash of rough seas. The first three days were calm with partly sunny skies and brilliant sunsets. There was lots of laughter, great food, and long backbreaking hours. Knowing bad weather was on the horizon, the skipper and crew were working their way through the gear as quickly as possible. My job is to sample one sixth of the total number of traps hauled, which involves collecting and recording data such as sex, shell hardness, injuries, mating marks, size, and other observations including recording and identifying by-catch species.

Our fourth day started out flat calm and gray. The sky and the ocean were joined as one. We were tired and sore from the previous 17-hour day so it was a slow 8 a.m. start. An hour into our day the conditions changed, the wind picked up and the seas began to grow. Still we plugged away. Traps were hauled, emptied, rebaited, and set. Crabs were sorted, and roughly one-sixth were sampled.

By late afternoon, the seas had grown to four to six metres and the crew decided to head for refuge in Queen Charlotte on Haida Gwaii with a stop along the way to set the last 50 traps still on deck. The crew donned their wet gear and life jackets. I stood at the galley door and recorded video of them setting traps happy it wasn’t me out on deck. Tired, wet and happy, we rode out the storm, slowly making our way to port, and docking after midnight. I took the ferry back to Prince Rupert with a tale to share with the team and Jennifer Paton, an Ecotrust Canada Fisheries Project Manager, who was scheduled to take the next biosampling trip across the Hecate Strait.

Crawford Stanley “Buzz” Holling, a tribute to our former board member and mentor