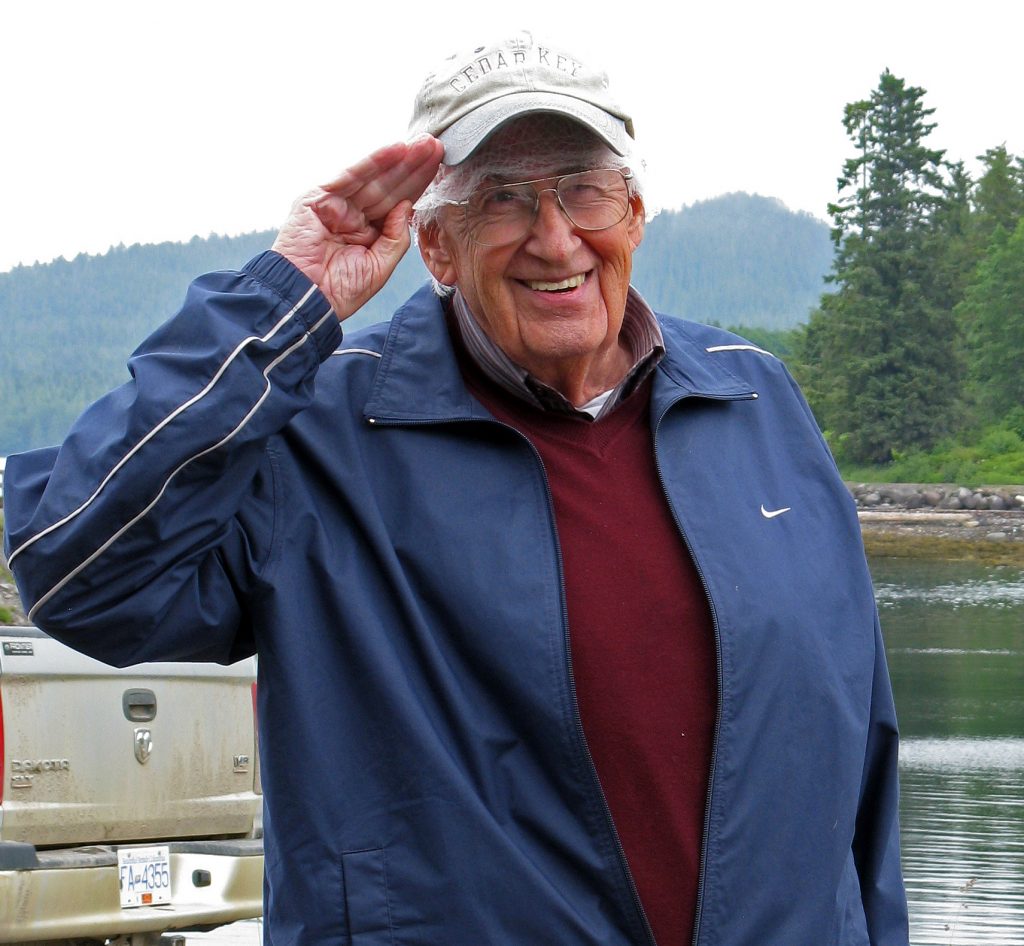 Crawford Stanley “Buzz” Holling was known internationally as an ecology pioneer, an ecological economist and a resilience theorist.

To many at Ecotrust Canada, Buzz was an intellectual giant, a mentor, and the driver behind resilience thinking within the charity. From 2008-2015 he served as a board member, later receiving emeritus status until his recent passing on August 12, 2019, at age 88.

Co-chair Jacqueline Koerner, who remembers Buzz’s first board meeting, said that he constantly reminded Ecotrust Canada of the critical importance of experiments and building diverse approaches to solutions within communities.

“Buzz joined the board of Ecotrust Canada in September 2008 as the financial crisis exploded. He brought an intellectual force with a remarkable capacity for inter-disciplinary thinking and experimentation. He welcomed diverse thinking, loved a good argument, brought a hearty laugh to almost all that he explored and was deeply committed to humanity and the ecological systems that underpin all life,” Koerner said.

“Buzz believed that flexibility and adaptability were critical to resilience as social-ecological systems needed to be able to accommodate to the unknown. He was a powerful mentor and scientist, always connecting people and ideas.”

A year after joining the Ecotrust Canada board, his work was recognized nationally as he was named Officer of the Order of Canada: “for his pioneering contributions to the field of ecology, notably for his work on ecosystem dynamics, resilience theory and ecological economics.”

Buzz was born in 1930, spending his formative years surrounded by the forests of Northern Ontario. His academic journey began at the University of Toronto, where he received BA and MSc degrees in Zoology. He continued on to the University of British Columbia where he received his PhD in 1957 on the mathematical theory of predator-prey interactions.

As the director of the Institute of Resource Ecology at UBC he studied the complex and diverse interactions between people and nature, leading to his theories on resilience. In the 1990s, he established himself at the University of Florida, where his work led to the Resilience Alliance, an international research hub that explored resilience thinking focused on human and natural systems.

During his tenure, he received numerous accolades including the Mercer Award and the Eminent Ecologist Award from the Ecological Society of America, the Austrian Cross of Honour for Science and Art and the Volvo Environmental Prize.

At Ecotrust Canada, board members and staff recall Buzz’s contribution to the organization over the years.

Tasha Sutcliffe, former VP at Ecotrust Canada and currently a senior advisor for the Community Fisheries program, said: “He was an amazing contributor to Ecotrust Canada as a board member, and a hero and friend to myself and many of our colleagues in and out of the organization, past and present.”

Long-time board director Ronald Grzywinski said he wasn’t aware of Buzz’s reputation until later in life. When they were both members on the board, Ronald said “it quickly became apparent that he was a giant, of and for the earth.”

“The real opportunity to truly access his standing in the pantheon of environmental leaders was when I attended his 80th birthday celebration. In that small room were crowded many of his former students, now each a leading thinker or worker on issues relevant to the earth’s survival.

“He was truly a giant who begot giants. How much more can one do in life?” -Ronald Grzywinski

We share our heartfelt sympathies with his family, and know Buzz will be missed by all those who knew him, who worked with him around the world, and who were guided by him at Ecotrust Canada.

His brilliant mind and deep passion and commitment to work we all believe in, continues to be a great influence in what Ecotrust Canada is and does.