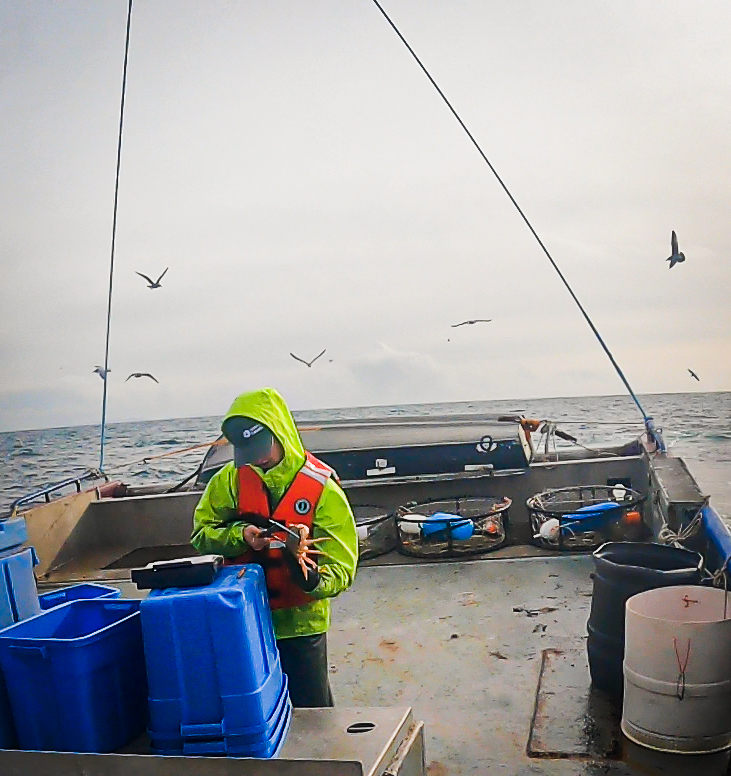 By Shannon Lough, Manager of Communications and Engagement, and greenhorn at-sea observer

The Dungeness crab in my hand spreads its claws open in a motion that reminds me of the heavy metal gesture seen at concerts. As I hold the ornery crab, which is now trying to pinch the tip of my pencil, the ship rocks and I brace myself in a wide stance. Rain drips off my hat, as 2-3 metre seas test the fortitude of my stomach, the pungent scent of squid wafts around me and for a moment I wonder how I ended up here.

Ecotrust Canada has worked with Area A Crab Fishery for over 11 years building innovative solutions to manage the fishery. One of the services we provide is biosampling. We collect accurate, unbiased, timely scientific data on Dungeness crab caught in the Hecate Strait between Prince Rupert and Haida Gwaii. The data, which includes shell condition, sex, length, and injury, is then shared with Fisheries and Oceans Canada (DFO) to support science, conservation, and management in the fishery. We offer our DFO-designated At-Sea Observer Program to BC’s crab and salmon fisheries to provide high quality data to scientists to ensure that commercial fisheries are sustainably managed.

For the past six years, I’ve called Prince Rupert my home, a place where crab traps are commonplace and the salty scent of a ship offloading at Odin Seafood drifts along the path to the waterfront park. Dungeness crab has easily replaced lobster as my favourite crustacean. Over the years, my curiosity to witness what it’s like to work and live in the Hecate Strait has only grown. With the need for local at-sea observers to fulfill the Area A Crab Management Plan requirement of conducting four crab biosampling trips a year, I volunteered to take the necessary training — a stark contrast from my regular gig as Manager of Communications.

Seeing a window of decent weather ahead of us, I hopped on the Nanruss crab boat for a 5-day trip mid-October. With my overnight bag, my camera gear, and a bag of snacks, I met the crew of three at the dock with my trainer Dianne Villesèche, Project Manager for Fisheries and Marine Monitoring. Dianne made sure that I felt safe and comfortable aboard the Nanruss. Once I had my designated bunk, my monitoring gear securely stowed, and I’d been introduced to the skipper, she snapped a photo of me with the crew and waved goodbye.

Those first few hours, as we left the shelter of the harbour and entered the tumultuous waves in the Hecate Strait, left me curled up in my bunk next to a supply of Gravol as I staved off sea sickness. We reached the shores of Haida Gwaii late in the night, and with the sound of the anchor, its chains releasing from the vessel, I found rest.

I awoke to the heavy metal chain being pulled back in. I found the two deck hands sitting down in the galley holding coffee topped with whipped cream as the skipper moved us to our first string of crab traps. I prepared the waterproof data sheets for observing and reviewed the training manual once again. With land in sight, and the sea still angry, we suited up in our rain gear and stepped out on deck.

The first day was a flurry of crab traps being unloaded into the hold, then rebaited and set back into the sea. At the start of each string of traps, I would place one of my blue buckets next to the deck hands and asked them to fill it with all that was found in one of the traps, including shells, bycatch, and crab. Then I stood at my station, a makeshift stand-up desk with another bucket turned upside down. One by one, I picked up a crab and identified the sex, shell hardness, possible injuries, mating marks, size, and other notes. If there was bycatch, I’d report that as well — starfish, sunflower star, halibut, and hermit crabs. Once the crabs in that bucket had been recorded, I’d ask for another bucket to be filled, and so it went.

At first, my crab handling was cautious, and they must have sensed my greenhorn vibes. After one of my pencils was snapped in half by one particularly cantankerous crab, I resolved to be more confident in my grasp to save my limited pencil supply, and my fingers.

Each day, after sorting through crab and documenting data, I became familiar with an observer’s duty while surrounded in the absolute splendour of the Haida Gwaii coastline. With the seas calming, and the sun beaming through the clouds, followed by an ample moon and stars, I saw the attraction to being a part of this moment. As an at-sea observer, I experienced the camaraderie between deck hands, the loud high-octane music they played that took me back to clubs in the mid-2000s, marathon work hours that tested mind and body, and the delight of being cradled to sleep in my bunk.

On our journey back to harbour, I sat in the wheelhouse admiring the view of snow on mountains as the sun set behind the Nanruss. A humpback whale flashed its tail at us and then descended out of sight. In the name of science, and to be part of this rare glimpse of a crab harvester’s world, I’d sign up for an at-sea observer trip again, although next time I’ll request a summer departure.

Fukasaku of Prince Rupert: putting local food producers and consumers at the heart of a food market