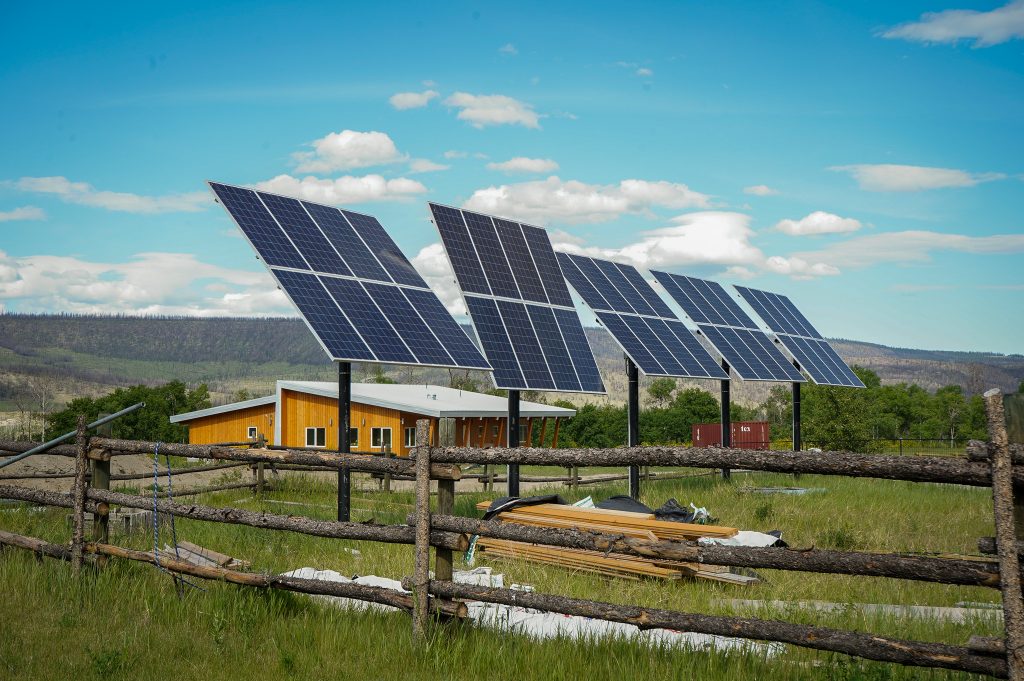 Crossing into the Yuneŝit’in community you may see horses grazing on grass between one of the 50 homes based on the reserve. Mid-June, when I travelled with our Indigenous Home-Lands Director, Anthony Persaud, after we were invited to make one of our first community visits in over a year-and-a-half, that was exactly what we saw. Free roaming horses set within layers of rolling hills and burnt forests.

Located 105 km from Williams Lake, and one of six Tŝilhqot’in communities in the Cariboo-Chilcotin interior of BC, Yuneŝit’in is demonstrating how a small-scale forestry program can meet the housing needs of a remote Indigenous community.

“We have members who identify the forest’s health, haul the logs out, and then we turn those logs into housing projects,” said Gabe Pukacz, Yuneŝit’in’s Capital Projects manager, when defining the Forest to Frame approach.

Gabe met us in Horsefly village, outside the Yunesit’in Leading Edge facility, an enterprise that is producing finished housing materials, jobs, and revenues to be circled back into the Yuneŝit’in economy. A recent delivery of raw logs brought a smile to Gabe’s face, as he explained the next project they’re working on. Using a Leading Edge designed wall system, the timber frame house will use two 2×8 inch boards laminated together with double tongue and groove. 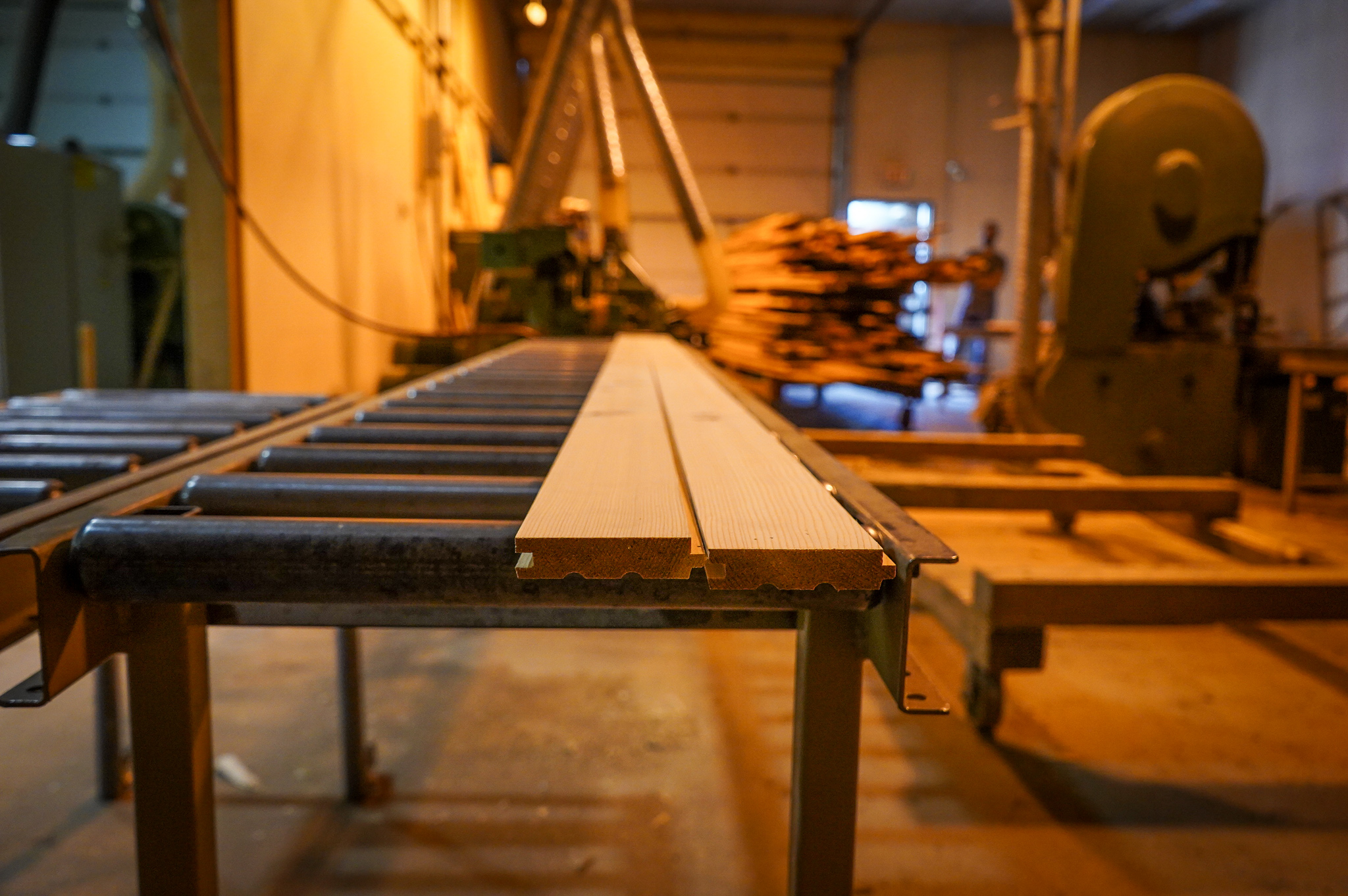 The plan is to create the finished materials at Leading Edge, and then deliver them to Yuneŝit’in, where they will build the 1,000-square-foot home in a day that will become the new residence for a local band member.

The community’s first housing project, the Yunesit’in Guest House, already stands tall with aesthetic angular framing. The guesthouse was built with Leading Edge’s heavy wood flooring, and the walls and frame are made from cut timbers cut produced at the local mill in Yuneŝit’in — forest to frame. 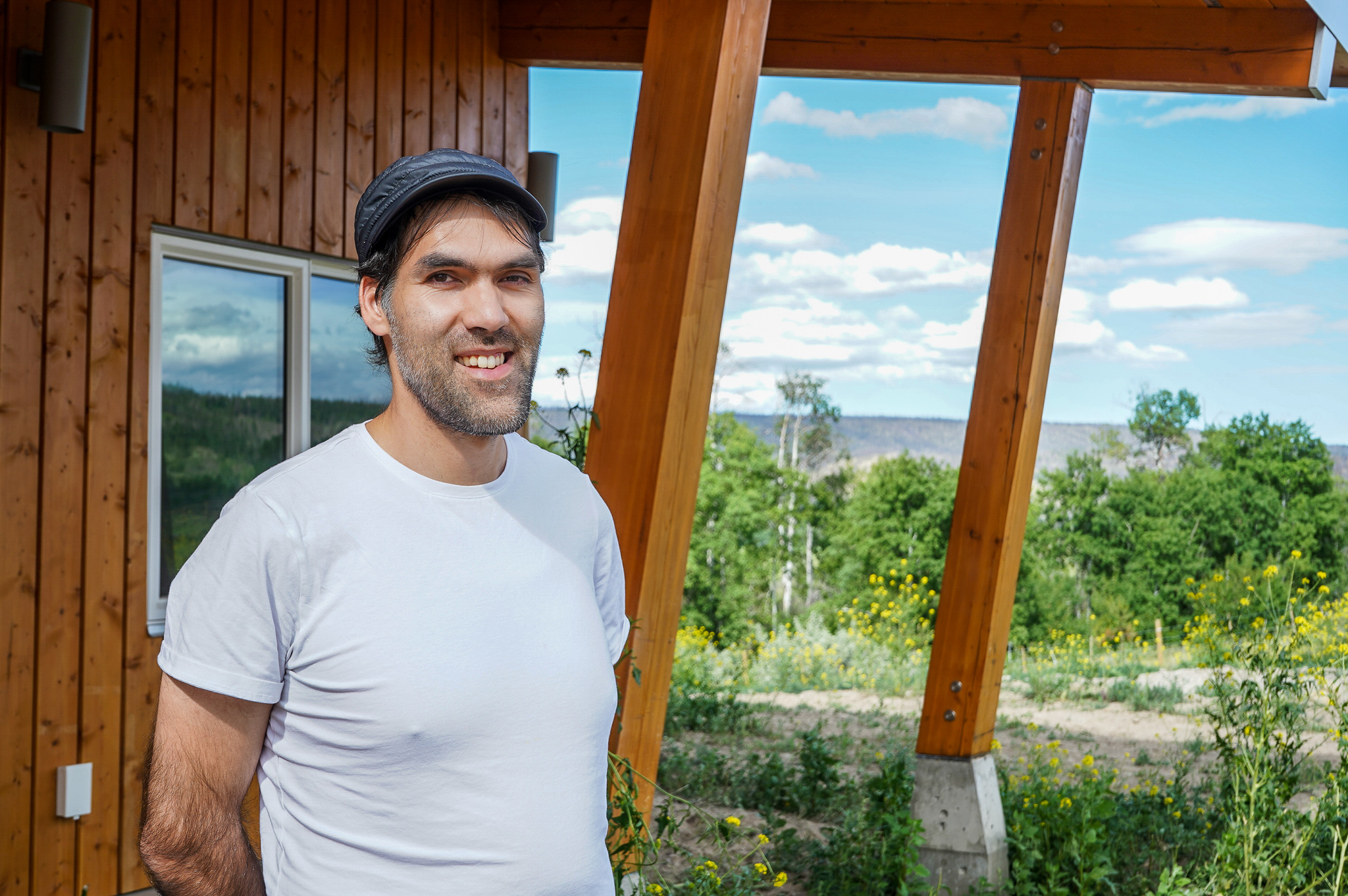 Former Elected Chief/Nits’il’in of Yuneŝit’in Government, Russell Myers Ross, gave us a tour of the guesthouse, which is nearly complete. Views of the surrounding hills can be seen from the many windows. Once finished, there will be three bedrooms, one master, a full kitchen and pantry, walk-in showers, and a spacious living room. Russell said his original vision five years ago was to build a place for people to stay when they come to work in and with the community, but he sees potential for tourism as well.

Using small-scale forestry practices, the community is harvesting oversized Douglas fir trees, salvaging wood that had been attacked by the pine beetle or ravaged by the 2017 wildfires. These sustainable forestry methods look to address the housing needs in the community.

Yuneŝit’in band has 219 living on-reserve and 266 living off-reserve. While there are 40 people on the waiting list for housing in Yuneŝit’in, there are members living outside the community who have expressed a desire to return to their homeland if there is adequate housing and economic opportunities.

The community’s goal toward self-determination and self-reliance is diverse and innovative. Driving toward Yuneŝit’in, you’ll pass the largest solar farm in BC, 100 per cent owned and operated by the Tsilhqot’in Nation. With 3,450 solar panels, the farm is producing enough energy to power between 130 and 150 homes.

On the reserve, there are three greenhouses managed by Norma Cahoose, who said produce is sold at the Williams Lake farmer’s market. Across the road, stands the community’s own sawmill, separate from Leading Edge, where locals are trained and employed to cut lumber for housing projects. 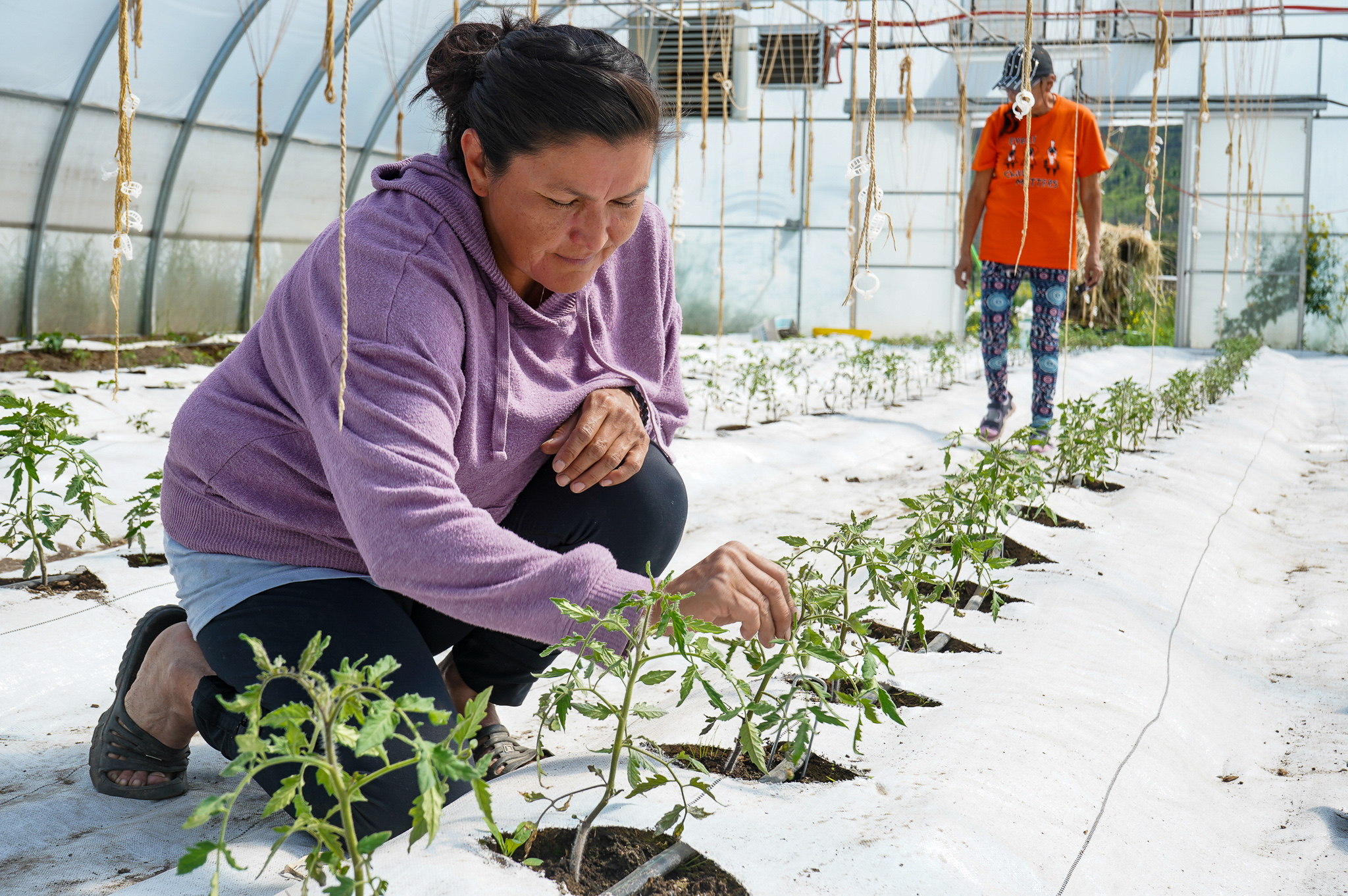 For the past few years, Ecotrust Canada has been working with Yuneŝit’in to create systems and tools that demonstrate the benefits of their housing and economic approach, and to share information with other communities looking to take a similar path.

During our visit, our Indigenous Home-Lands Director, Anthony Persaud, presented to the Elected Chief and Council on the housing evaluation framework we’ve been developing with Yuneŝit’in as they bring the Forest to Frame supply chain concept to life. The report Yuneŝit’in Housing Ecosystem Overview and Strategy Development (2020) was published earlier this year, along with a Housing Ecosystem Overview Toolkit, designed to be a resource for communities looking to transform their housing ecosystems in meaningful and impactful ways.

As British Columbia begins to reopen from the pandemic lockdown, we will only visit partner communities that we have been invited into. It was such an honour to be in community once again, meeting the people we work with in person, to share a laugh, and to witness the growth of projects stemming from the Forest to Frame approach. 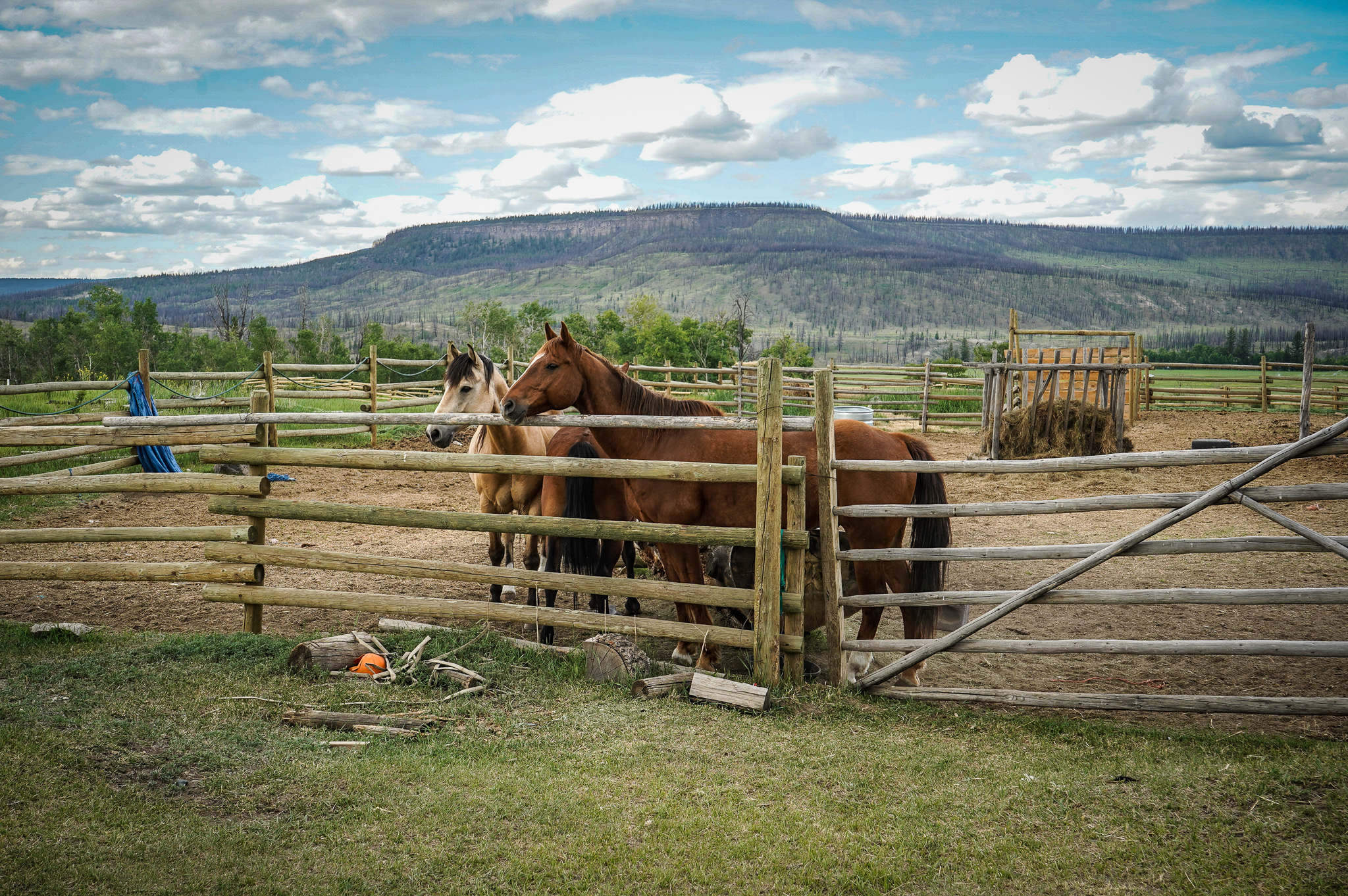 Written by Shannon Lough, Manager of Communications and Engagement

Chance to be courageous: a conversation with our CEO and new Chief Impact Officer