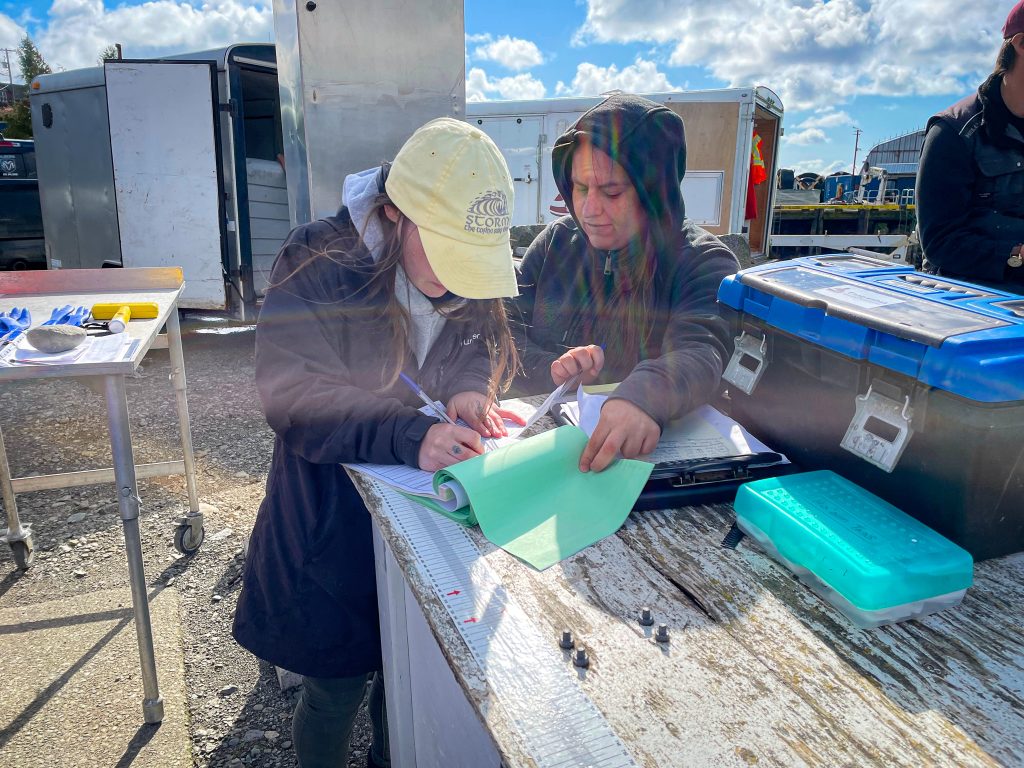 Growing up between Ahousaht and the traditional territory of the Tla-o-qui-aht First Nations (Tofino), Shelby Huebner has spent much of her life on the water, and on the docks. In her first month as Ecotrust Canada’s new Fisheries Project Coordinator and Deployment Supervisor, Shelby shared her story with me over a video call from her office in Tofino.

“I missed being on the dock, so I’m happy to be back,” Shelby said to me.

This isn’t her first time working in fisheries for Ecotrust Canada. At 19, she trained to be a part-time dockside monitor for the Five Nations Fishery with Ha’oom Fisheries Society. The Society supports Ahousaht, Ehattesaht/Chinehkint, Mowachaht/Muchalaht, Hesquiaht and Tla-o-qui-aht First Nations in their Indigenous right to harvest and sell fish from their traditional territories.

A member of the Ahousaht First Nation, Shelby’s been fishing with her family since she was just a kid. She fished with her grandpa, Hugh Clarke, who had a troller named Sonya, and then fished with her family on their aluminum speedboat. Admittedly, she gets a bit seasick at times, and she recently developed a crab allergy, so giving up fishing for collecting essential scientific fisheries data on the dock was an easy switch.

After a couple seasons working as a part-time dockside monitor, Shelby became the Ahousaht Community Fisheries Liaison with Ha’oom Fisheries Society acting as the contact point for the nation. She also took on new responsibilities helping her parents run her grandpa’s general store after his stroke.

The Ahousat General Store has been a mainstay in the remote coastal community since her grandpa opened its doors over 60 years ago. “It started out as just a little building and now it’s expanded to a big store. It has fishing gear, gas, hardware, almost anything you can think of,” Shelby said.

For residents, the store is just a two-minute boat ride across from the village, instead of the 30-minute commute to Tofino, where you’d find the next closest grocery store.

Shelby spent her formative years in the traditional territory of the Tla-o-qui-aht First Nations (Tofino), where her mother worked as a postmaster for Canada Post. Her father made his living as an entrepreneur, building roads and logging. Her brother also became a fisherman and logger. In 2020, after her grandpa passed away, her parents moved back to Ahousaht to manage the general store with their three cats, and three dogs.

These days, Shelby commutes between the two communities, spending time with family in Ahousaht, and coordinating Ecotrust Canada’s Dockside Observer Program for the Five Nations Fishery. This year, with her team of monitors working from the Tla-o-qui-aht First Nations (Tofino), to the traditional territory of the Mowachaht/Muchalaht First Nation (Gold River), up the coast to the traditional territory of the Ehattesaht/Chinehkint First Nation (Zeballos), Shelby will help build local fisheries monitoring knowledge and employment.

Ecotrust Canada offers these services as part of our mission to support the revitalization of the Indigenous and non-Indigenous commercial fishing industry on the Pacific Coast so that it is managed by, and benefits, the communities of the region.

“Data collection is very important to ensure a sustainable fishery, and that there’s no overharvesting,” Shelby said.

The Five Nations fishery is unique in that everyone can participate in the fishery, whether they’re in a troller or an aluminum skiff. Harvesters can sell to local restaurants or fish stores in town after the fish have been weighed and validated by observers on the dock. In 2009, the BC Supreme Court recognized the Indigenous rights of the five Nuu-chah-nulth Nations to catch and sell all species traditionally harvested within their territories. Ha’oom Fisheries Society facilitates and supports the fishery while “upholding the Nuu-chah-nulth principles of hishuk ish tsa’walk (everything is connected, everything is one) and isaak (respect) in the approach to managing opportunities and fisheries for the Five Nations.”

In her spare time, Shelby volunteers with the Tofino Salmon Enhancement Society to improve salmon stocks in rivers within Clayoquot Sound. She helped with the broodstock in the hatchery this year, and prior to the pandemic, she joined a group of volunteers to pack thousands of salmon fry to release into the river system.

We are so pleased that Shelby took the job as Ecotrust Canada’s Deployment Supervisor and Project Coordinator for the Five Nations fisheries monitoring program; it’s safe to say she is a perfect fit for the role.

If you’re interested in learning more about her family’s story find a copy of The Hot Springs Cove Story: The Beginnings of Maquinna Marine Provincial Park.

Written by Shannon Lough, Manager of Communications and Engagement