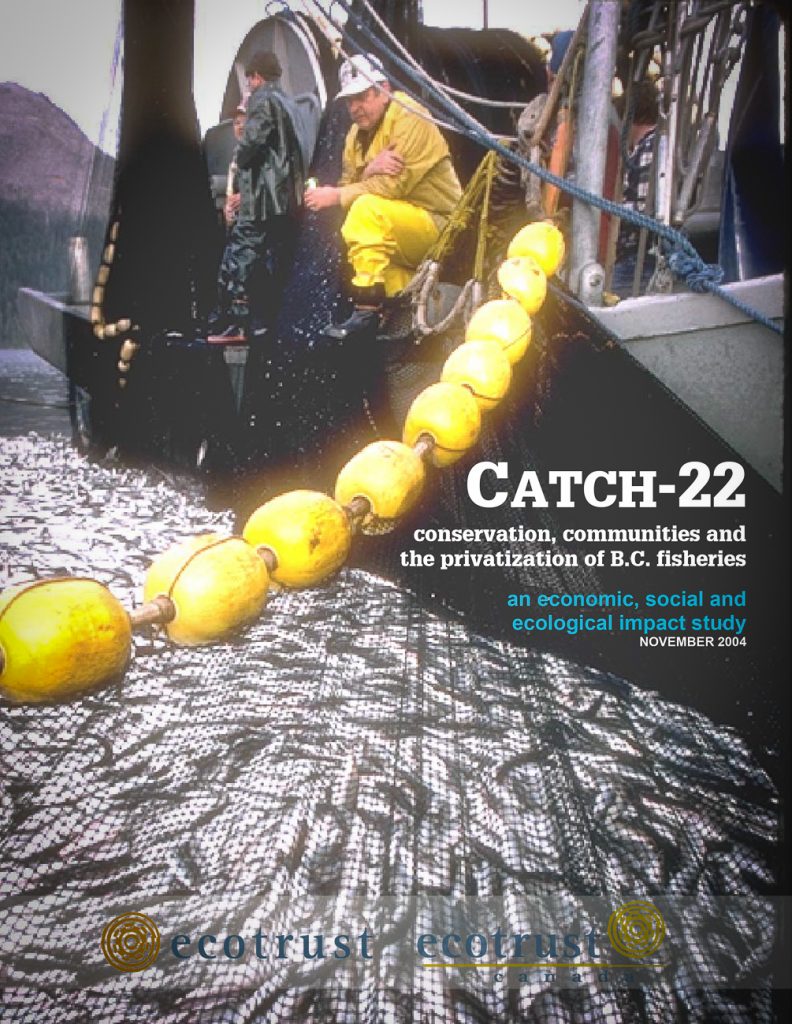 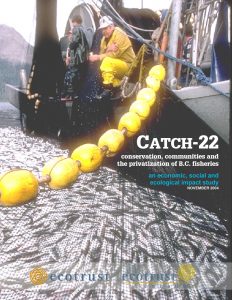 For four generations her family has been working as commercial fishermen on the West Coast of Vancouver Island. “Growing up in Ucluelet, I saw fishing infusing life into this town,” says Edwards, Ecotrust Canada’s Fisheries Coordinator. “The docks would be packed with boats and people. Now, most of that is gone.”

She watched the decline and consolidation of the fishing industry into the big cities. By the late 1990s, Ucluelet’s Boat Basin, like many docks in other coastal communities, was deserted. What went wrong?

A former fisherman and marine biologist, Edwards was part of a team of researchers in Canada and the United States who answered this question with Catch-22: Conservation, Communities and the Privatization of BC Fisheries, a seminal study that garnered headlines across the province. Ecotrust Canada and Ecotrust (US) published the study, which employed Geographic Information Systems (GIS) technology to map the socioeconomics of BC’s commercial fishing industry.

“The Catch-22 report put real numbers to the collapse of commercial fishing in the small rural coastal communities of British Columbia,” Edwards says. “For the first time, we were able to quantify and explain what forces were driving this radical change.”

The repor investigated the economic, social and ecological impacts of federal fisheries licensing policy, especially those promoting individual fishing quotas (IFQs). Under an IFQ system, an individual or company owns a preset portion of the total allowable catch. Quotas can be bought, sold or traded like shares on a stock exchange. IFQs are considered a form of resource privatization. The Department of Fisheries and Oceans (DFO) has implemented IFQs in the geoduck, halibut, sablefish, groundfish trawl and three shellfish fisheries. It is currently developing a controversial plan to implement IFQs in BC’s salmon fishery.

The report found that many of the major reforms of BC fisheries in the 1990s, including the introduction of IFQ programs and Mifflin Plan in the salmon industry, represented a catch-22 for fishing-dependent communities. DFO’s solutions created as many economic, social and ecological problems as they solved.

Ecotrust Canada and Ecotrust (USA) commissioned this report to engage the public in a well-informed and balanced public policy discussion about the future of BC’s fisheries resources, and to provide independent analysis and recommendations to the the West Coast of Vancouver Island Aquatic Management Board and ‘Namgis First Nation.

Simply understanding the problem isn’t enough, however. Ecotrust Canada is exploring strategies to rebuild fisheries through innovative community-based models such as licence banks, which could hold fishing privileges in trust for local fishermen and future generations. Integrating social, economic and biological data with traditional knowledge is also central to creating fisheries that are sustainably managed and eco-certified.

“We need to return meaningful control of fisheries back to communities,” Edwards insists. “This requires that the people who know the resource best, those who live next to the ocean and those who fish it have a meaningful place at the decision-making table.”