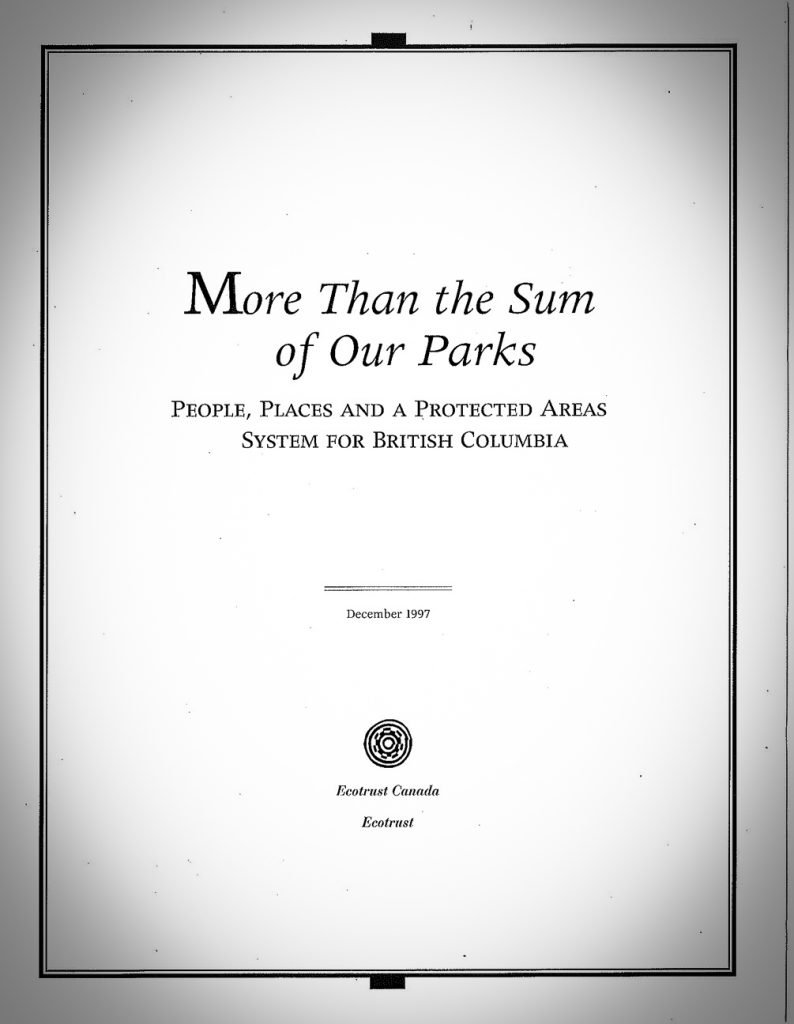 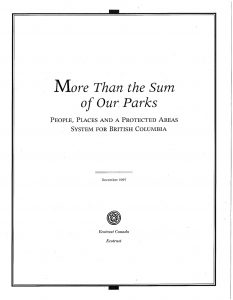 Should the habitat needs of wildlife be thought of as superior to the recreational needs of people? And which people, anyway? Do First Nations people have a territorial claim to parks and protected areas that somehow overrides the right of access of other people? Should Indigenous people have rights to use resources in parks that are otherwise denied “ordinary Canadians”?

The answer to that last question – yes – shouldn’t come as a surprise to anyone who has paid the slightest attention to recent court decisions regarding aboriginal rights in Canada, particularly in British Columbia. The fact is, First Nations people can and have demonstrated that their occupation and use of BC’s lands and waters has spanned thousands of years. No other single group in Canadian society can claim that.

Only recently have Canadians, led by the courts, acknowledged that the ways mainly non-aboriginal people have divvied up the supposedly common wealth of the nation — through complex legal entitlements, tenures, quotas, allocations, and licences — have constantly come at the expense of Indigenous people’s own entitlements.

Ordinarily, this dilemma is characterized in the media as creating great uncertainty for investors, especially in resource sectors such as mining, logging and fishing. Occasionally, a thoughtful report will point out that this situation hasn’t exactly provided much certainty, or wealth, for Indigenous people, either.

What has been largely absent from these discussions, however, is much serious analysis of British Columbia’s “investments” in parks and protected areas, and how our society’s conscious decision to somehow “set aside” large and small tracts of land and marine ecosystems intersects with First Nations’ evolving rights. At the same time, not much attention has been paid to the fact that, in society as a whole, our expectations of our parks system have changed from an era when parks were established simply for “our use and enjoyment”, to a realization that they are necessary simply to provide habitat in a world that is fast losing its ecological wealth and diversity.

In respect of First Nations, BC’s much vaunted Protected Areas Strategy — through which the province has created hundreds of parks covering millions of hectares — assures Indigenous people that all this park making is “without prejudice” to their stance in treaty negotiations. This is an important promise, because more than 50 First Nations are negotiating modern treaties and in almost every case, the territories under claim include land designated as a park.

“Without prejudice” is an important promise, but regrettably, it is also a hollow one. Even before the recent Delgamuukw ruling, which has significantly strengthened the hand of all First Nations, it was clear that the Protected Areas Strategy prejudiced Indigneous interests in their traditional territories.

Parks and protected areas — the Tatshenshinis, the Carmanahs, the Stein Valleys of which we should all be proud — have been created through legislation that deems such areas to be “inalienable.” This is an attempt to make sure parks stay parks, and don’t get turned into tree farms or copper mines at some point in the future.

But surely if we legislate the inalienability of these areas, by definition they also cannot be transferred to First Nations in treaty settlements. This prejudice is compounded by the fact that in treaty negotiations, the BC government has avowed that it will “maintain parks and protected areas for the use and benefit of all British Columbians.”

There would appear to be something fundamentally irreconcilable about a commitment to assure First Nations that parks won’t prejudice their rights or treaty negotiations, while at the same time saying to British Columbians that parks are protected for everyone’s equal use. What is more, First Nations seek different uses for what are now protected areas than do people who want parks made for recreation or the preservation of wilderness. First Nations’ uses are consistent with their traditions, such as hunting and gathering, fishing, and ceremonial uses of various resources. In my experience, they are less interested in the recreational opportunities provided by parks, and frankly are somewhat mystified by the notion of “wilderness” areas as being somehow untouched by humans, since First Nations people have been inseparable from the natural ecosystems of British Columbia for thousands of years.

What this conundrum points up is that our existing protected areas legislation is failing British Columbians – and not just First Nations. In an analysis of BC’s protected areas system just published by Ecotrust Canada, it is our finding that a focus on protecting areas for high-profile species like bears and ungulates has produced a fragmented protected areas system that doesn’t go far enough to protecting the full spectrum of ecological integrity in BC.

Furthermore, not all protected areas are secure from future development. There is a widespread assumption that areas being set aside as protected areas are being protected forever. In fact, as it now stands park boundaries can be altered, and in fact whole parks can even be deleted from the Park Act — something that a future government might be under pressure to do if anti-environmental forces hold sway. Future governments will always have the right to undo what this generation has done — so building a broad social allegiance to our protected areas system is critical.

Lastly, there is also an assumption that we have a parks management system that is up to the task of looking after the parks heritage we are creating. Since 1992, 246 protected areas have been created in BC, bringing the total to 645. Another 200 or so are in the works. But to date, of the 645 existing protected areas, 406 areas have no management plans. This, when BC Parks’ annual budget is being reduced, not increased. The BC government has created what it calls a Park Legacy Project to address these issues. It is seeking input as to how to make the system work. At a minimum, we believe British Columbians should demand new legislation that secures real ecological integrity, and that bans adverse activities in parks such as mining, hydroelectric development, oil and gas development, logging and high-impact tourism. We need legislation that ensures greater accountability for how our parks are managed, that provides ways to connect parks to their surrounding landscapes, and that creates mechanisms that ensure the costs are fairly borne. Most importantly, we need to face up to the post-Delgamuukw world and make sure our protected areas are jointly managed with First Nations, and that their aboriginal rights are honored.

Ecotrust Canada has proposed a Protected Areas Act that embraces the components outlined above. We are sharing our recommendations with the public, with First Nations governments and with the provincial government in the hope that we can create mechanisms in law that are worthy of the incredible protected areas system we have all worked hard to create.

But laws alone are not enough. In our parks – as in every other walk of life in British Columbia — what we need most of all are examples of Indigenous and non-Indigenous people working together to steward all our resources in ways that respect First Nations’ traditions, honour the needs of present generations, and provide a rich future for those to come.