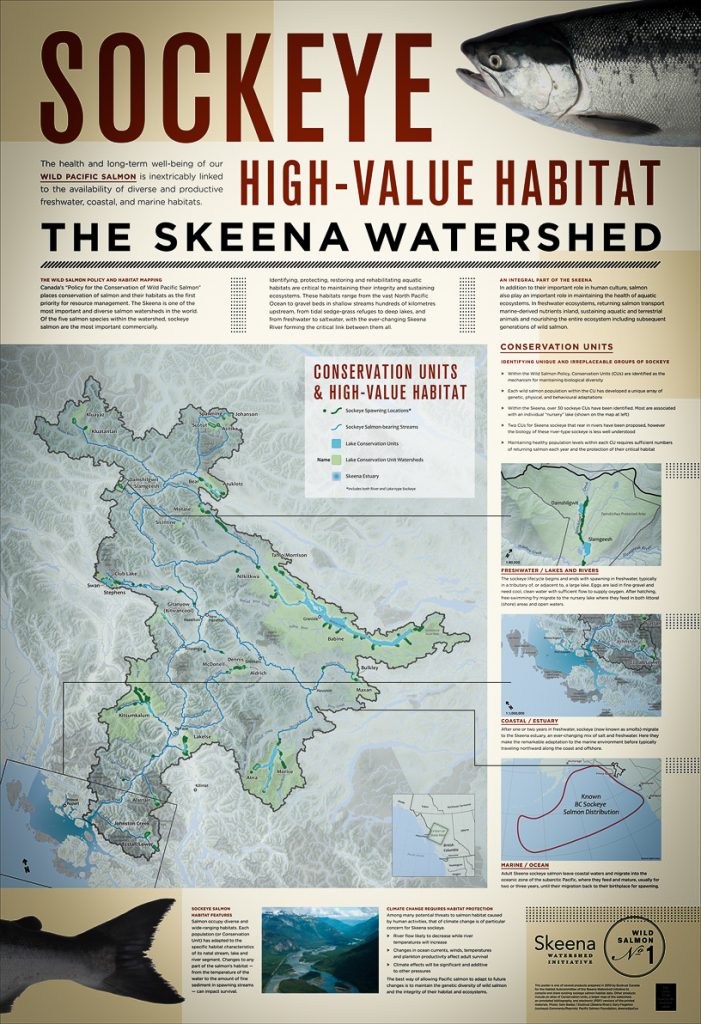 Download the poster as a medium resolution PDF suitable for most purposes. (Very large, high-resolution PDF for reproduction below). Or you can read the text and view the maps individually below.

Identifying, protecting, restoring and rehabilitating aquatic habitats are critical to maintaining their integrity and sustaining ecosystems. These habitats range from the vast North Pacific Ocean to gravel beds in shallow streams hundreds of kilometres upstream, from tidal sedge-grass refuges to deep lakes, and from freshwater to saltwater, with the ever-changing Skeena River forming the critical link between them all. 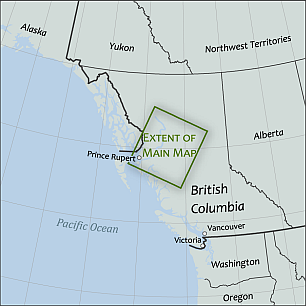 An integral part of the Skeena
In addition to their important role in human culture, salmon also play an important role in maintaining the health of aquatic ecosystems. In freshwater ecosystems, returning salmon transport marine-derived nutrients inland, sustaining aquatic and terrestrial animals and nourishing the entire ecosystem including subsequent generations of wild salmon. 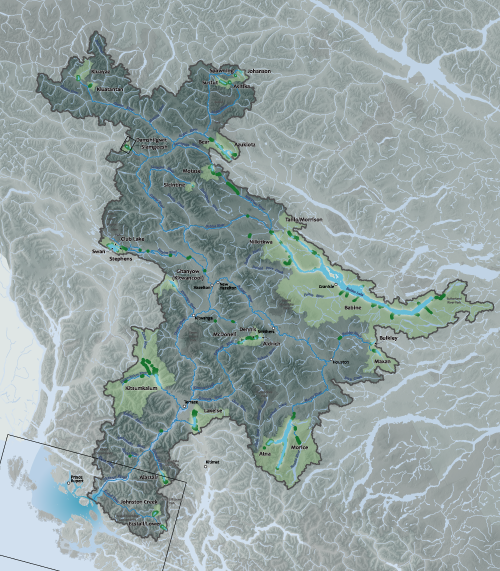 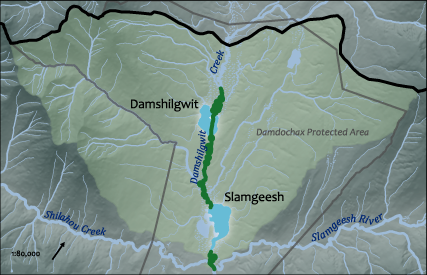 The sockeye lifecycle begins and ends with spawning in freshwater, typically in a tributary of, or adjacent to, a large lake. Eggs are laid in fine gravel and need cool, clean water with sufficient flow to supply oxygen. After hatching, free-swimming fry migrate to the nursery lake where they feed in both littoral (shore) areas and open waters. 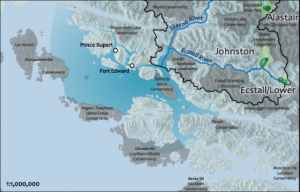 After one or two years in freshwater, sockeye (now known as smolts) migrate to the Skeena estuary, an ever-changing mix of salt and freshwater. Here they make the remarkable adaptation to the marine environment before typically traveling northward along the coast and offshore. 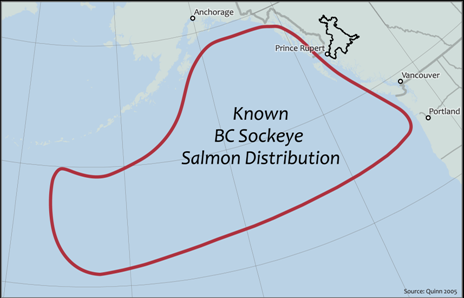 Adult Skeena sockeye salmon leave coastal waters and migrate into the oceanic zone of the subarctic Pacific, where they feed and mature, usually for two or three years, until their migration back to their birthplace for spawning. 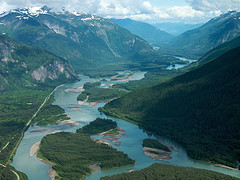 Salmon occupy diverse and wide-ranging habitats. Each population (or Conservation Unit) has adapted to the specific habitat characteristics of its natal stream, lake and river segment. Changes to any part of the salmon’s habitat — from the temperature of the water to the amount of fine sediment in spawning streams — can impact survival.

Among many potential threats to salmon habitat caused by human activities, that of climate change is of particular concern for Skeena sockeye.

The best way of allowing Pacific salmon to adapt to future changes is to maintain the genetic diversity of wild salmon and the integrity of their habitat and ecosystems.

This poster is one of several products prepared in 2010 by Ecotrust Canada for the Habitat Subcommittee of the Skeena Watershed Initiative to compile and share existing sockeye salmon habitat data. Other products include an atlas of Conservation Units, a larger map of the watershed, an annotated bibliography, and electronic (PDF) versions of the printed materials.