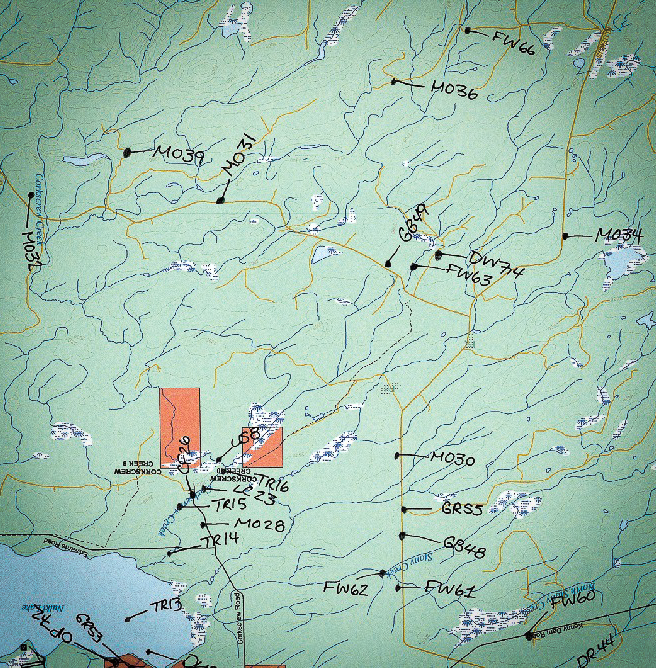 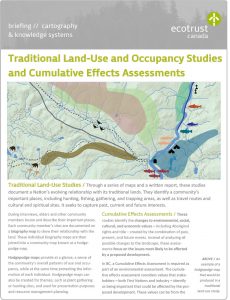 During interviews, Elders and other community members locate and describe their important places. Each community member’s sites are documented on a biography map to show their relationship with the land. These individual biography maps are then joined into a community map known as a hodgepodge map.

Hodgepodge maps provide at a glance, a sense of the community’s overall patterns of use and occupancy, while at the same time protecting the information of each individual. Hodgepodge maps can also be created for themes, such as plant gathering or hunting sites, and used for presentation purposes and resource management planning.

These studies identify the changes to environmental, social, cultural, and economic values — including Indigenous rights and title — created by the combination of past, present, and future events. Instead of analyzing all possible changes to the landscape, these assessments focus on the issues most likely to be affected by a proposed development.

In BC, a Cumulative Effects Assessment is required as part of an environmental assessment. The cumulative effects assessment considers values that stakeholders — both First Nations and industry — identify as being important that could be affected by the proposed development. These values can be from the natural or human environments, with scientific, ecological, economic, social, cultural, archeological, or historical importance.

When Kinder Morgan Canada proposed their Trans Mountain Expansion Project (TMEP), one BC First Nation was asked to inform Kinder Morgan of the potential impacts of their work. Since the proposed pipeline would intersect their traditional territory, this Nation had to document its past and present land-use practices in order to assess the potential impact of the TMEP on their environmental, social, cultural, and economic assets and values.

Through this work, the Nation hoped to:

The Nation asked Ecotrust Canada to support them in this process by conducting both a Traditional Land-Use and Occupancy Study and a Cumulative Effects Assessment.

Our shared goals were to:

In partnership with the Nation, Ecotrust Canada designed a three-phase study:

The Cumulative Effects Assessment we conducted drew on discussions with a focus group from the Nation, as well as a number of secondary sources, such as Kinder Morgan Canada’s Cumulative Effect Assessment, ethnographic accounts, archeological studies, oral testimonies, and technical studies pertaining to the Nation’s traditional territory. The assessment helped to clarify and illuminate the systematic way in which cultural identity and land use have been eroded over time through a combination of factors, both natural and imposed.

Traditional Land-Use and Occupancy Study participants identified more than 2,000 sites within their traditional territory. Nearly 10% of these sites were within the 150 meter wide TMEP corridor, and more than 30% were located within 500 metres of the corridor’s boundary. Almost 30 travel routes intersected the TMEP corridor, showing how the corridor could potentially limit or alter access and use of the sites.

The Cumulative Effects Assessment described the ways in which this Nation’s use of their traditional territories had been eroded over time by a number of factors and events, including:

The Nation submitted the final report, including all theme and hodgepodge maps, analyses, and interview excerpts, to the National Energy Board in May 2015. The report illustrated how the TMEP, in combination with the lingering effects of historical events, would significantly increase pressures on the Nation and harm their ability to exercise their Indigenous rights and title.

The combination of the Traditional Land-Use and Occupancy Study and the Cumulative Effects Assessment supported the Nation in clearly and effectively informing Kinder Morgan Canada of the potential impacts of their proposed developments. This project also helped reintroduce the Nation’s younger generation to their heritage as the Nation’s elders shared stories about their culture, traditions, relationship with the land, and ancestors’ daily lives prior to European contact, preserving this knowledge for generations to come.