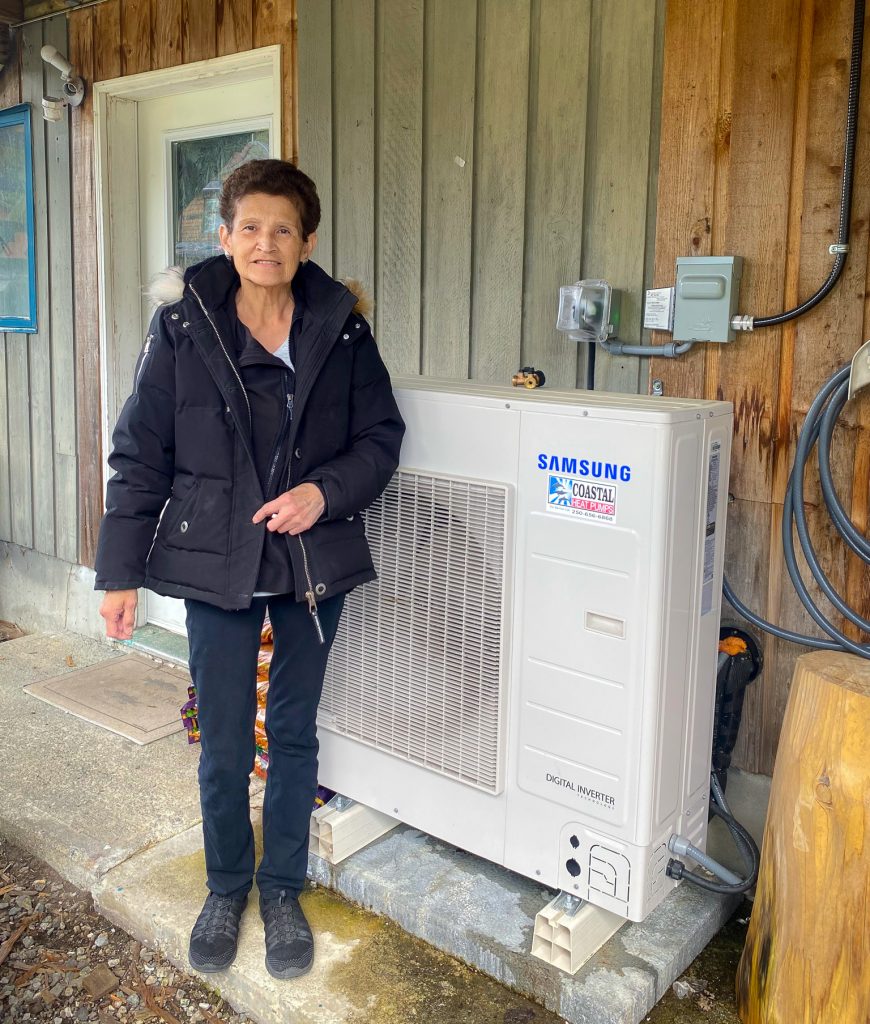 At the heart of the Haíɫzaqv Community Energy Plan is H̓íkila qṇts n̓ála’áx̌v, protecting our world, a statement that holds the values, principles, and worldview of the Haíɫzaqv people. The plan, which includes fuel switching via heat pumps, is a pathway to reclaiming clean energy sovereignty and resiliency for the Haíɫzaqv by the Haíɫzaqv.

The plan was created with two-years of deep community engagement, and over 1,000 voices were included. Without a doubt, residents are on board with this community-led initiative to take immediate and meaningful steps toward climate action.

“We got a mandate from our people like none other,” Leona Humchitt said to me over a video call from her home in Wágḷísḷa (Bella Bella, British Columbia). Leona introduces herself as the Haíɫzaqv Climate Action Coordinator and Tribal Councillor, emphasizing she’s also a wife, a daughter, and a grandmother.

“What we’re doing is hard work but it’s heart work for our children.”

I wanted to speak with Leona to learn more about how her remote community in the Central Coast of BC is becoming a shining example of how we can all work together, locally, to find solutions to the climate crisis — and not in the next 10 years, but right now. The Haíɫzaqv are already entrenched in actual on the ground work, and as they pursue their vision for a cleaner future, their climate leadership is being noticed. This year, Clean Energy BC honoured the Haíɫzaqv Nation with the Community of the Year Award for the creation of their Community Energy Plan, and they’ve been featured twice on CBC’s What on Earth podcast, among other media mentions.

“I always share a statement by the United Nations that resonates with me. Eighty percent of biodiversity is intact where Indigenous people live, and we’re the first to feel the impacts of climate change,” Leona said.

Taking care of the planet is integral to the Haíɫzaqv community that thrives off the ocean, which Leona calls their breadbasket. Making the switch from diesel fuel to heat pumps in over 400 homes in the community reduces the risk of another spill, it saves homeowners thousands in heating bills, and each home that installs a heat pump eliminates 5 tonnes of harmful greenhouse gases each year.

My colleague, Phil Climie, Retrofits Program Manager with the Community Energy team, joined me in the interview with Leona. He’s providing valuable support through fundraising initiatives and coordination of the Heat Pump Project.

“Homes in the Haíɫzaqv Nation were spending excessive amounts on energy, up to $5,000 a year, which is around three times the provincial average,” Phil said.

Heat pumps were less familiar in 2017 when the Haíɫzaqv Nation and Graham Anderson, Director of Community Energy at Ecotrust Canada, first came together to work on a business case analysis. From the research, and based on the temperate climate, heat pumps were identified as the solution to improve home energy efficiency by leveraging power from the Ocean Falls hydroelectric dam in Haíɫzaqv Territory. Fast forward into 2022, 154 homes have installed heat pumps — eliminating 770 tonnes of greenhouse gases each year, equivalent to taking 295 gas-powered cars off the road — local community members are being trained to maintain them, and this summer another 120 heat pumps are scheduled to be installed.

Homes have been using oil furnaces, electric furnaces, plug-in and baseboard heaters, or wood stoves to heat their homes, systems which are expensive and inadequate in the cool, damp climate. So, how did heat pumps become the solution?

“I love this heat pump,” Yvonne Lawson says about her new home energy system. “In the winter, it keeps me nice and warm, and in the summer the air conditioner keeps me nice and cool, especially during the heat waves. It’s a good investment that our band has made for us.”

The Heat Pump Project is just one of the 10 climate solutions laid out in the Haíɫzaqv Climate Action Plan. Food security, economic opportunities, and clean energy jobs are also included. To meet the demand of home energy audits in the region, the plan to train and certify a local Energy Advisor, a professional who calculates the energy performance of a home and makes recommendations for reducing energy use and improving comfort and safety, is already in the works. Ecotrust Canada begins a Training and Mentorship program for Energy Advisors along the remote coastal region starting this June.

In March, members from the Ecotrust Canada team were invited to join the community feast in the Gvúkva’áus Haíɫzaqv (House of the Haíɫzaqv) to celebrate the creation of the clean energy plan.

When I asked Leona how they were so successful in engaging so many voices from their community she attributes it to investing in bringing their language into the plan. Q̓átuw̓as Brown, the Communications Manager on the team, enrolled in a language immersion class during the planning process. She also spent over 200 hours with her mentor, her grandmother, one of the few fluent Haíɫzaqv speakers left.

“That’s what I credit the ownership over the plan, and why people wanted to be a part of it, because it was deeply rooted in our worldview and our language,” Leona said.

So, what’s next? Heating systems are just one component of a home’s overall energy efficiency. Initiatives around air-sealing homes, upgrading old appliances, and upgrading windows, doors and insulation are planned or underway. As work at the household level continues, the Haíɫzaqv are going to work on fuel switching commercial buildings in the community. When I spoke to Leona, the chill of winter hadn’t left the coast, and the community hall had been closed for a couple weeks due to rising fuel costs that reached over $5,000 a month to keep the space warm and open to the public.

“It’s the only place that our children go. Those are the kinds of things I’d love for us to look into as next steps as we continue to build on the success that we have today,” she said.

To dive into the Haíɫzaqv Community Energy Plan check it out here. We’ll continue to keep you in the loop on their incredible climate leadership.