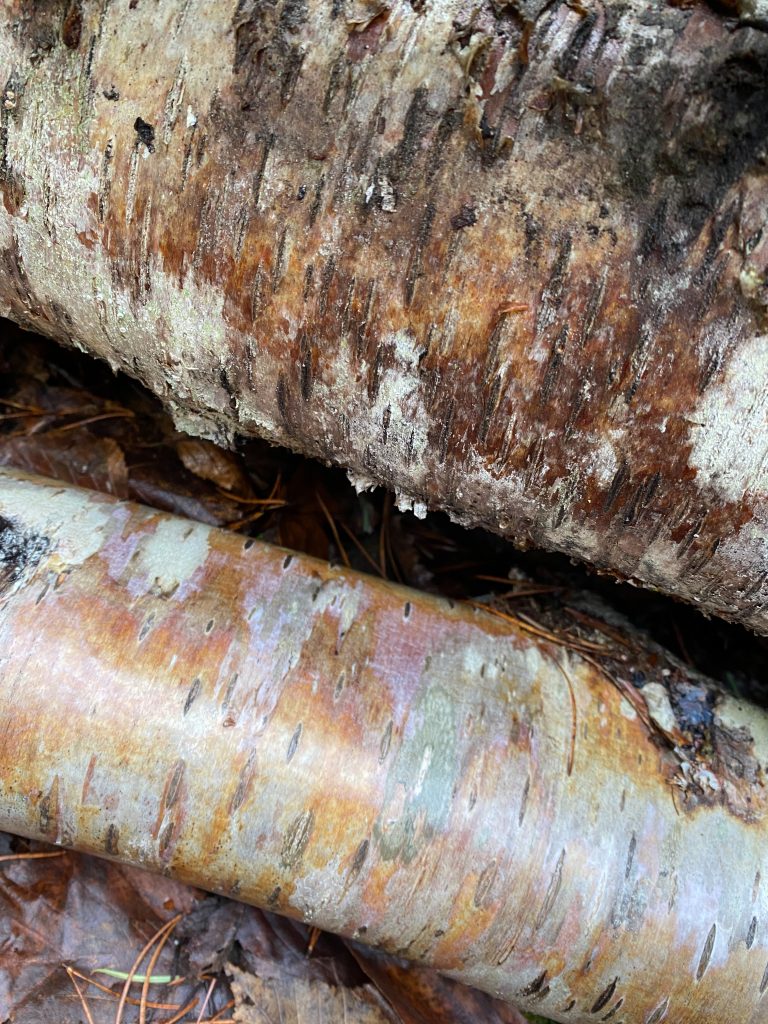 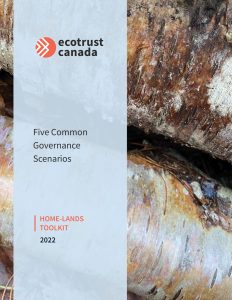 The five dominant scenarios are the Indian Act (1) and — within it — the First Nations Land Management Act (2); the Modern Treaty framework (3); Aboriginal Title (4), and Reconciliation Agreements (5).

The Indian Act is the most restrictive scenario regarding the flexibility communities have in relation to creating their own innovative housing governance models. Aboriginal Title is the least restrictive, though that scenario offers little in the way of guideposts or support moving forward. The diagram below outlines the relationship between these five scenarios, including which have more certainty regarding land-zoning, management, and building, and which have more constraints related to options for housing governance models. 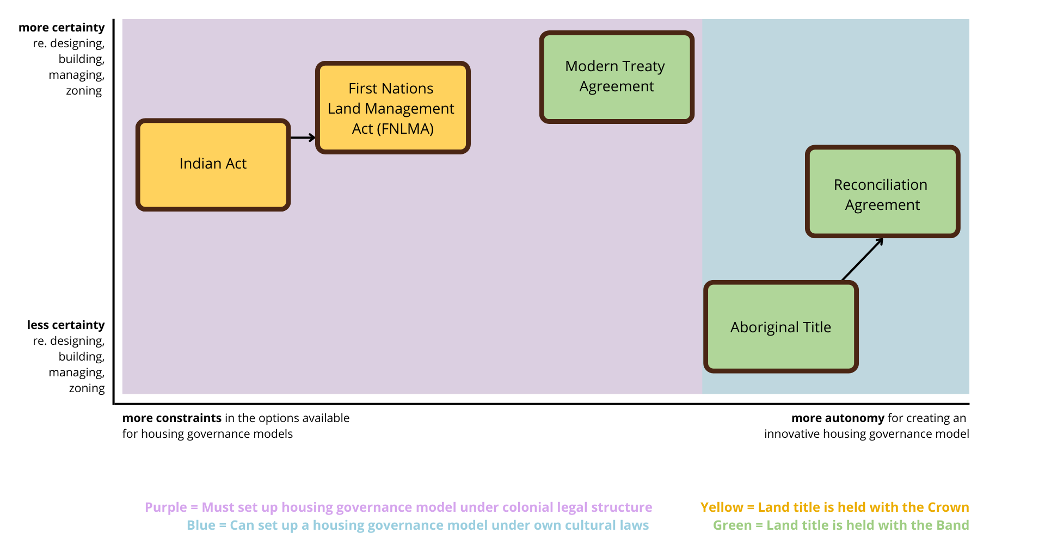 How does each scenario affect housing governance?

This is the most restrictive scenario. The Band has constrained self-determination regarding housing and the boundaries are very restricted. The Crown (Canadian federal government) is responsible for all housing decisions and for providing “adequate, safe, and affordable” housing (see this module for a critique of this definition of good housing). Under Section 88 of the Indian Act, the Crown can delegate this responsibility to the provincial government. The Band is responsible for communicating and negotiating with the Crown and are required to get approval from the Crown prior to zoning, designing, or building.

Often, this scenario means that Bands have their hands tied, so to speak, and cannot advance on housing projects until they receive approval from the Crown. Due to this, there is little opportunity for innovation or “re-working the wheel” and Bands often sign boilerplate templates of pre-approved housing policies so that they can receive funding and move forward with projects. In this way, projects can be well-funded and relatively efficient, but are rarely in line with community needs or cultural values.

The FNLMA is still part of the Indian Act. Therefore, communities do not have “ownership rights” over houses and land. They are still bound to Indian Act regulations, but within those constraints, Bands can administer land how they want.

In this scenario, there are still clear and restrictive boundaries, but the Band has authority to make decisions about land-zoning and tenure within the reserve without permission from the Crown. Because of this delegation of authority, housing governance can be managed much more effectively than in the sole Indian Act scenario above. The FNLMA also allows Bands to designate lands more easily, including for example as lease land.

Osoyoos Indian Band, for example, is under the FNLMA. They built a local business model that includes 13 businesses within the tourism and services industries, as well as a property-tax regime within the reserve space. With 540 members, unemployment rate is under 3% and 20% of the members are in leadership positions. While such models can potentially allow Nations to economically prosper, there is no guarantee of cultural legitimacy or sustainability in their implementation.

Under the FNLMA, there is some flexibility and freedom regarding how to create and manage housing governance. However, many Nations who operate under FNLMA still use boilerplate templates for housing policies, partly due to the amount of time, resources, and capacity it takes to create effective novel policies from scratch. That said, with considerable support (i.e., funding, training, and capacity-building), communities who operate under the FNLMA could create innovative community-specific housing and land-use policies that are more in line with their cultural laws (see this module).

In this scenario, boundaries are less restrictive than in the first two scenarios and First Nations have self-determination regarding housing governance. This scenario still operates under colonial law, which means there is a fee-simple transfer of property (to “own land”) to the Band as a collective. Unlike in the first two scenarios, land title is held with the community, not the Crown.

Modern Treaties usually include a lump-sum payment from Crown to Band, plus recognition and self-governance over one’s treaty lands (which are often a small portion of the territory). Each Modern Treaty can look very different, since it is a context-specific negotiated agreement between each Band and the Crown.

With Modern Treaties, the Crown fully abdicates all responsibility over housing. In this way, there is independence regarding housing governance, but there is also no support to fund, design, build, and manage housing. The key here is that entering a Modern Treaty Agreement (called “the Final Agreement” by the Crown) means fully leaving the Indian Act (including all limitations and rights included in it). For example, bands can no longer access funding opportunities available in Section 95 of the CMHC (Canada Mortgage and Housing Corporation).

In this scenario, there are no constraints but also no certainty. The relationship with the Crown in relation to housing governance is not as clear as in the previous three scenarios. Unlike with Modern Treaties, Nations who have Aboriginal Title do not necessarily relinquish their rights (i.e., funding opportunities for housing) associated with the Indian Act. Communities can be part of the Indian Act (and FNLMA) and have Aboriginal Title.

Aboriginal title (also called Declared Title) could theoretically lead to sovereignty, and there is self-determination related to all decisions associated with housing governance – i.e., which model to use, how to manage it, how to zone one’s land, etc. However, every step one takes is in the dark, without a clear path to follow. Because of this, Nations tend to either a) keep stepping until someone pushes back or b) go as far as they want to or can go.

Tŝilhqot’in Nation, for example, has Aboriginal Title. This case is precedent-setting in the context of housing because all six Tŝilhqot’in communities are united under the Tŝilhqot’in National Government, which now acts as the authority and administrator of housing funds, in place of the Crown. In this way, all six communities have relinquished their ability to individually apply for housing funding that would come from the Crown (Indigenous Services Canada) via the Indian Act, instead accepting a transfer payment to the Nation, administered by the Nation as a whole.

Reconciliation Agreements can arise from any of the above scenarios, with the exception of Modern Treaties. This scenario is the newest and most uncharted path that is being advanced as a result of DRIPA (Declaration on the Rights of Indigenous Peoples Act) and includes agreements based on FPIC (free prior informed consent). Though such agreements have yet to articulate what they mean in terms of housing governance, they could be one way to make Aboriginal Title work in practice. While Aboriginal Title opens possibilities, certain concrete scenarios like a Reconciliation Agreement could offer clear steps (that are designed and led by community) for how to move forward in the future, particularly with regard to setting up housing governance that is in line with community needs and cultural laws.

This scenario is highly theoretical since it is so new. The Tahltan Nation is currently in the process of setting up a FPIC agreement through DRIPA (the first of its kind in Canada) for consent regarding a mining project, which prohibits the Crown from proceeding with further development on the project. It will be interesting to see how this agreement may impact future development, including decisions on housing.

Not sure which scenario(s) may be the best fit for your community? Or unclear about the first steps to take, to shift from one scenario to another?

Reach out to the Indigenous Home-Lands initiative at Ecotrust Canada to support you in making an informed collective and community-led decision.

Innovations in Housing Governance for First Nations in BC