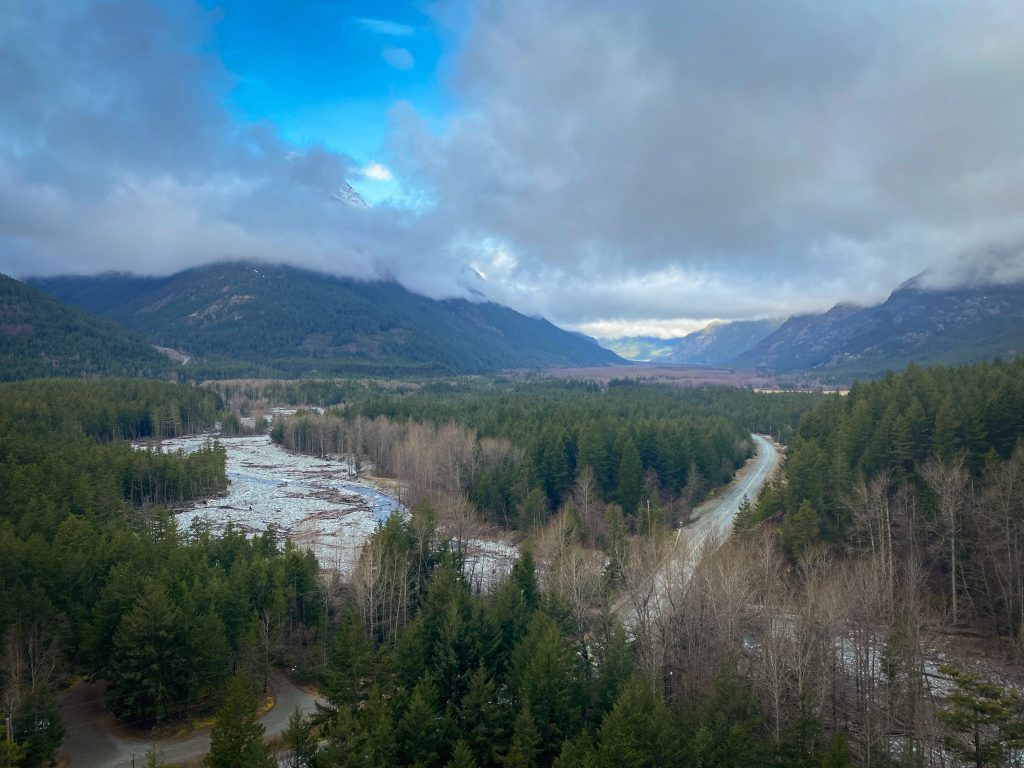 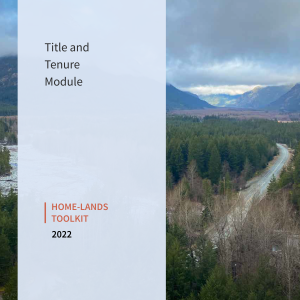 Before engaging with these terms, it is important to first discuss why First Nations may need to understand European notions of title and tenure.

The most tangible reason for many communities is that Common Law terms, like title and tenure, are used by the Crown in legislating over First Nation’s jurisdictions and peoples. In pursuing the fulfillment of community wants and needs there are advantages in knowing how to navigate and use this language.

If the intent is to continue to work within the Indian Act regime in the near future, then understanding the concepts of title and tenure can help communities navigate options within the First Nations Lands Management Act (FNLMA) and the First Nations Fiscal Management Act (FNFMA). [Link to Governance module] For example, under the FNLMA, communities have increased flexibility to develop customized land codes that adhere more closely to their values and visions for land (albeit with some limitations). [For example, three Sto:lo nations in BC jointly entered the FNLMA to share cost burden here]

If the intent is to pursue a new relationship with the Crown via a modern treaty or other agreement, then this language will be essential in understanding how the Crown considers what is at stake, and how to frame community desires for uses of land in a way that is understandable to Crown representatives at the negotiating table.

Understanding the legal concept of property

Before engaging with concepts like ‘legal title’ and ‘tenure’, it can be helpful to start with a straightforward question: what is property? Rather than only being understood as a physical object or portion of land, property can be understood more accurately as a certain relationship between a person and an object, and more broadly as a web of relationships.

Property law is how we attempt to socially mediate and manage this web of relationships between people and objects. If I lend you my pen, we would both hopefully understand that I can ask for it back and that you should return it promptly. We might say, I have a claim or a right to the pen regardless of who currently holds the pen. As owner, we also typically recognize the right to use and enjoy the pen without undue interference. I also usually have the ability to gift something I own, transferring ownership of the pen, and all the associated rights, permanently to you. In this way, we can begin to understand ownership as a bundle of all these associated rights that tend to travel together with whomever is ‘owner’.

Now, people don’t tend to get into serious arguments over who owns a pen such that we need to register in an office somewhere all the pens and who owns them, issuing pieces of paper that record the entitlement. However, given the scarcity and value of land, and due to the competition for it, the title system was developed as a way of formalizing and recording land relations to provide greater certainty around who can do what with it.

Today, the term ‘title’ can be understood both as specific entitlement to an area of land as registered at a Title Office, and as shorthand for a specific set or bundle of rights that tend to go together. If someone says they have title to their house that usually means they own it in what’s called a ‘fee simple’ entitlement, which means they would have all the usual rights we would commonly expect to accompany ownership, such as the rights to possess, control, exclude, enjoy, and transfer.

‘Title’ in this sense can be distinguished from tenure in two important ways; first, that it is not limited by a certain duration of time; and second, that it references a relationship between an individual and the land rather than a tenant and a landlord.

‘Tenure’, by contrast, tends to refer to property relations between two parties with regard to land use. In most cases, this involves transferring some of the rights from the overall ‘owner’s’ bundle to someone else, usually for a specified purpose over a specified time. One of the most common examples of this is a leasehold or lease, where the terms for the use of a property by someone other than the owner are set out in an agreement between the parties. 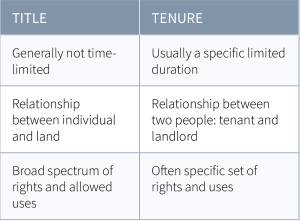 For First Nations seeking to develop their own tenure regimes on their traditional lands, it is hopefully clearer now that there is a great deal of flexibility available to the community regarding how the tenure relationship might be structured. It is up to the community which rights are transferred in the tenure and which are not. The tables at the end of this module provide examples of various kinds of title and various rights that are often separated and transferred distinctly.

For example, the community may consider a farming tenure. This would generally include the right to clear the land, turn the soil, plant crops, and have a right to what grows. If the community wants access to locally grown food as well as financial income there might be a provision for sharecropping, a legal arrangement where the landlord allows a tenant to use the land in return for a share of crops produced on that land.

It may also include some access and rights to use water sources in certain ways, as available. In these cases, the community can choose to restrain how the soil can be used and stipulate, for example, that only half of the land can be used at any one time to ensure the remainder has time to recover. It may also be desirable to include some restrictions on what kinds of fertilizers and chemicals can be used to protect ground water, etc. Then, there might be a stipulation for a right for the community to use a certain path or road that goes through the farmland.

The content of a tenure can be as simple or as complex as necessary and can be tailored to suit the community’s needs.

Aboriginal title, as referenced by Section 35 of the Constitution Act 1982, can be understood as the Crown’s recognition of an Indigenous People’s inherent right to their traditional territories. It is an entitlement to land based on the recognition of Indigenous customary tenure that existed prior to European contact and that continues to persist afterwards. This kind of title is referred to by the Crown as sui generis or, roughly speaking, of its own kind. What this means is Aboriginal title is considered distinct form all other forms of title in Crown law.

Importantly, Aboriginal Title is a concept in Crown common law and often differs from how a First Nation may understand their original right to their traditional territories.

Part of what makes Aboriginal Title distinct is that it is considered inherently inalienable as it is understood to be held collectively by the First Nation and generally cannot be sold or transferred, whole or in part, to any other party than the Crown. It is also distinct in that the legal foundation of Aboriginal title is not sourced in the assumed sovereignty of the Crown but stands independently on the basis of prior Indigenous occupation and jurisdiction.

[1] The term Common Law will be used to refer to the legal order established by the British and Canadian governments, as distinct from other legal orders.

[2] The term ‘tenure’ can be confusing as it technically refers to land that is granted and recognized by the state rather than another private person. Historically, all land was deemed to be ‘owned’ rightfully and solely by the monarch and so anyone else holding land was simply a ‘tenant’ of the King. We can still see the legacy of this feudal history in how people continue to refer to the owner of a rental property as a ‘landlord’. As time went on, and Common Law evolved out of the feudal system, the title registry system has become so prevalent that we tend to use other vocabulary, like ‘title’, to refer to these formalized relations rather than as a ‘fee simple tenure’.

Appendix: Tables of Title, Tenure, and the Rights in the Bundles

The table below lists some examples of various forms of title and entitlements to use land, and how they differ. The spectrum in uses varies between private to public uses, as well as individual to collective. 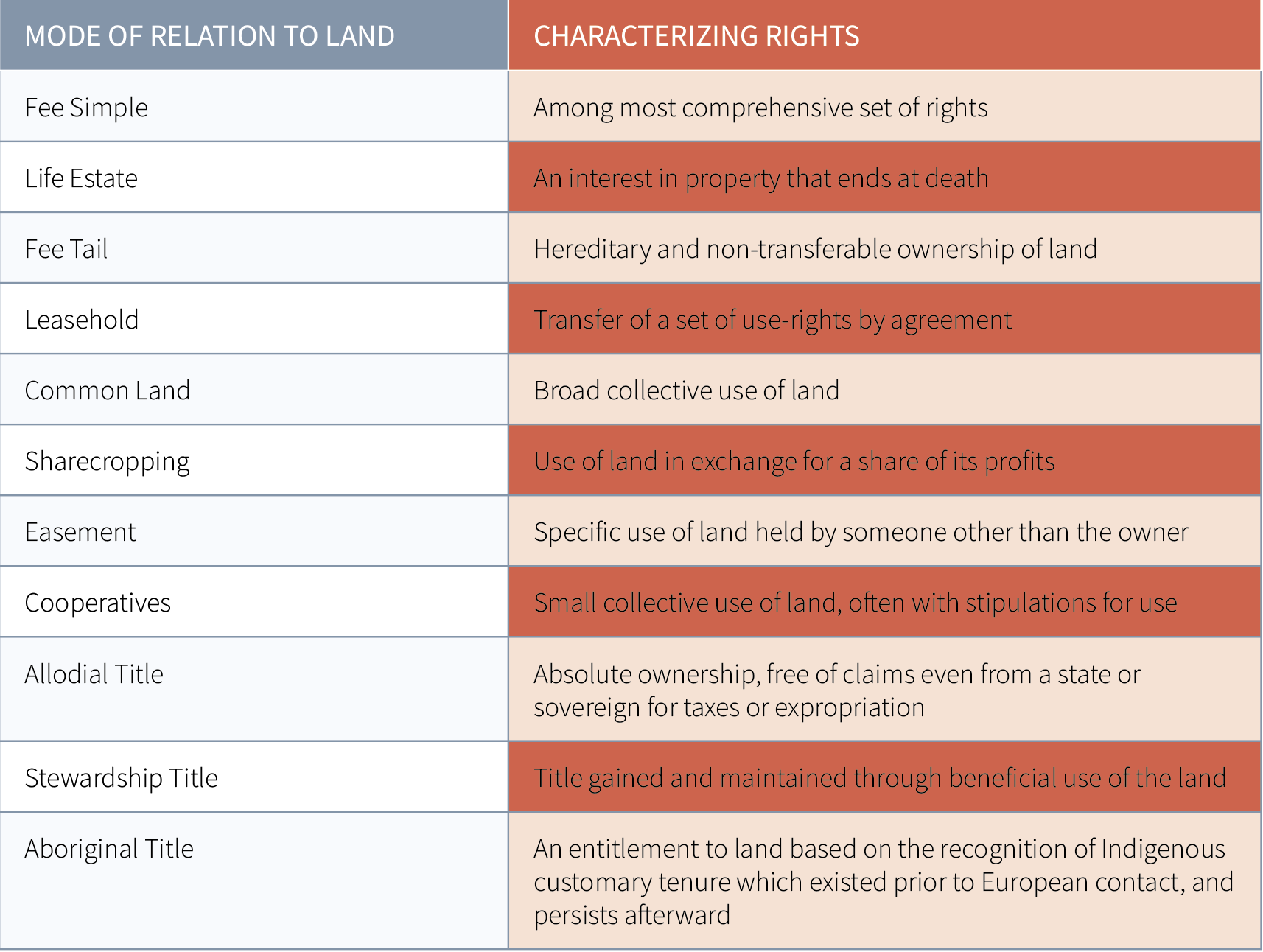 The table below lists examples of specific rights often set apart when determining a tenure relation, serving as the beginning of a menu for what may or may not be included in a custom tenure. 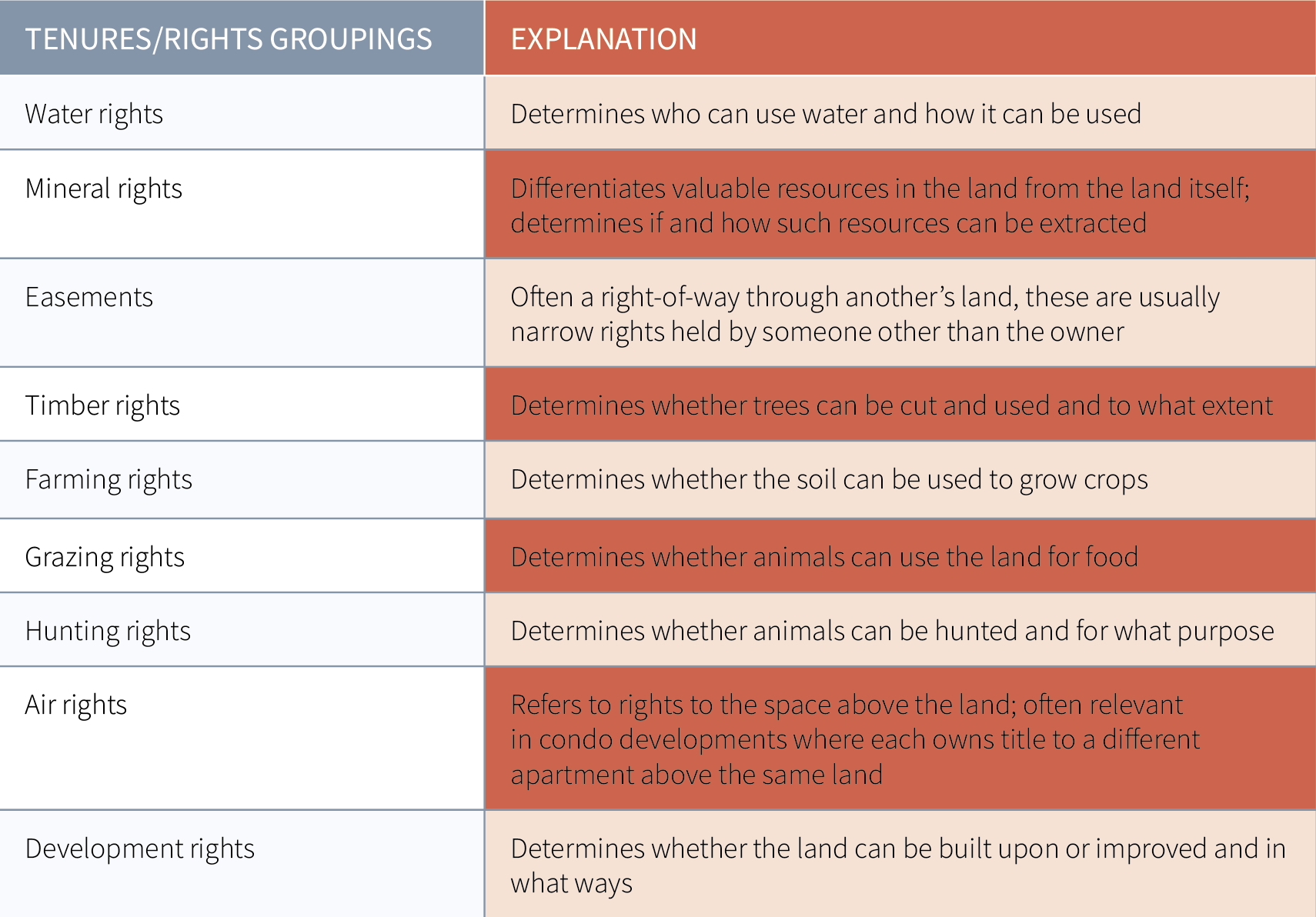 Rights and Responsibilities in First Nations Housing and Lands