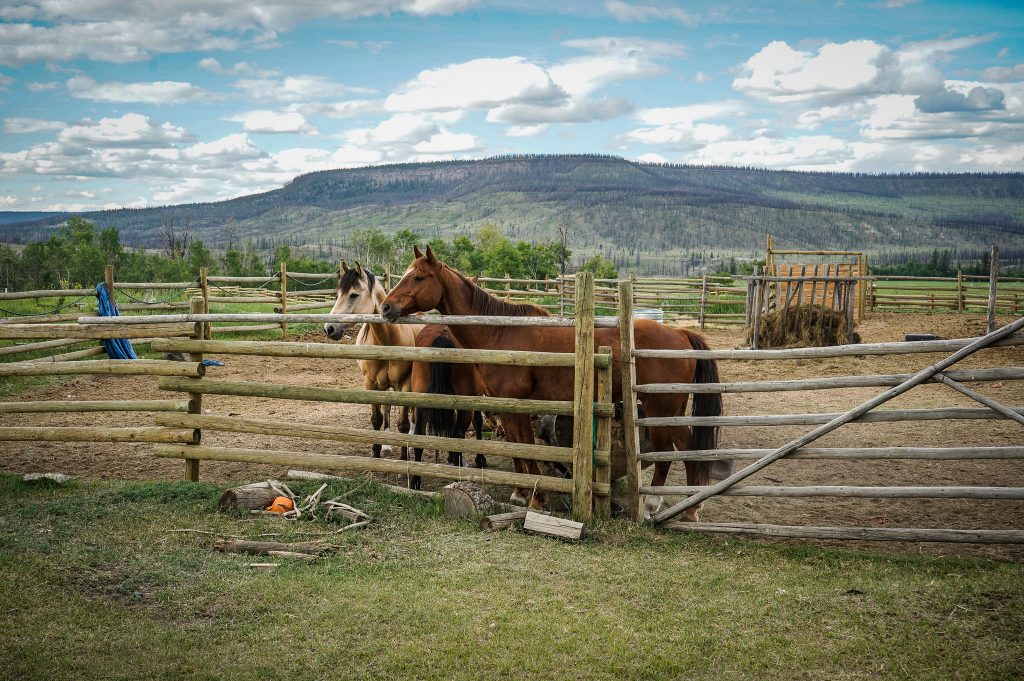 This exercise is designed as a tool and first step for First Nations to generate and work through community principles and values. As efforts to achieve self-government and self-determination gain ground, many Nations are faced with difficult choices regarding how to move forward and address community needs. Some approaches may seem easier or may have significant short-term financial benefits. However, some of these approaches may also feel inappropriate, culturally illegitimate, or as though they are simply reproducing structures that have been forced upon communities before.

The intent of this module is to provide a way to articulate and discuss what the community considers to be core principles and values, and then understand how these may or may not fit into specific housing and land policies, initiatives, and practices, including tenure.

Before going further, we should understand what we mean when we say principles and values.

Values refers to concepts that are unable to be simplified, usually a single word, that are asserted as fundamental by the community. These can include concepts like generosity, compassion, strength, etc. Values tend to be abstract rather than physical objects. For example, while land, place, and territory may be considered foundational, the ‘value’ in one’s relationship with their land might be belonging, balance, sustainability, etc. Values tend to be things that affirm abstract guidelines to act a certain way or guide how to prioritize decisions.

Principles refer to more complex statements that grow out of a community’s values, using them as building blocks, either directly or indirectly. Where a community might value health, a principle might be that the community is co-supportive of well-being in healthcare. Or where the value is balance, a principle might be that the community acts as caretaker and steward to lands and creatures around them. The principle proposes a general path to help realize the value.

If there are words in your language that describe the concepts you have in mind and you prefer them over an English or French word, consider using it untranslated. When it comes to fundamental and core concepts, language can act as a constraining lens and nuance can be lost in translation. For this reason, and many others, it is worth trying to ensure there are at least a few elders and/or some fluent speakers in your discussion group if possible.

The following exercise will walk you through a method for both generating these values and principles, and then viewing historical, existing, and proposed practices in light of them.

Begin by gathering in a group, if possible, though the exercise can also be done individually. Brainstorm a rough list of everything that comes to you as fundamentally valuable, both to yourself and what you think is valuable at a community and Nation level. [See worksheet for this exercise]

After generating this rough list, review what you have and consider whether each value you have listed has an even more fundamental value which grounds it. For example, you might consider heating in the winter to be valuable. Core to this is the notion of shelter, which could include a variety of necessary components of having a safe and healthy place to live. However, even in that sentence, there are also the values of safety and health, which are core to shelter.

Try to think about each item on your rough list this way and discuss with others if possible. Take note of any other values you discover and the connections they have with the items on your list. The goal is not to discount any options at this point but only to expand the list and perhaps begin to discover the concepts that thread their way through many other things the community may find valuable. The concepts that are frequently present across many areas may be worth noting as especially important.

Once you’re satisfied with a good-sized list of values, we can move on to principles (though any that you think of later can be added).

If you encounter any difficulty in generating these core values, it may be helpful to begin with principles below and work through them in the other direction, returning to values after.

Reflecting on the initial discussion of principles in the overview, principles are found and inspired by values, and are usually formed as a statement rather than a single word, eg. ‘Water is sacred’, ‘All our relations deserve respect’, or ‘Everything is connected’. You might find that multiple values you’ve already articulated can be found within principles you discuss. For instance, respect could be a value within all three of the above examples; similarly, the value of stewardship might be within one or all of the above.

You may have already come up with some principles in the previous list and then found even more fundamental values within them. Feel free to move those over to this list if you find they fit. And as you generate more propositions that you think could guide you and/or the community you might realize there’s a core value within it that wasn’t listed before and you can go back and add it there.

Now that you have two, possibly very long, lists of values and principles, do a final review and consider whether any two or more of them cover very similar territory and whether they could be combined into one principle or value. For example, if you have both ‘generosity’ and ‘giving’ you might consider choosing one term to stand for the same concept in both or finding a better third term.

Similarly, give another pass across both lists with an eye to whether each item is correctly placed as a core value or a principle, rearranging if necessary. Ultimately, you want to have two lists of whatever you consider to be ‘core’ values and ‘core’ principles. What amounts to being ‘core’ and how many there are is up to you and/or your group.

In order to start making sense of these lists and to begin working with them in a comparative capacity, take each list and add them to their own columns like in the following sample, Table 1, with a number for each Principle and a letter for each Value. 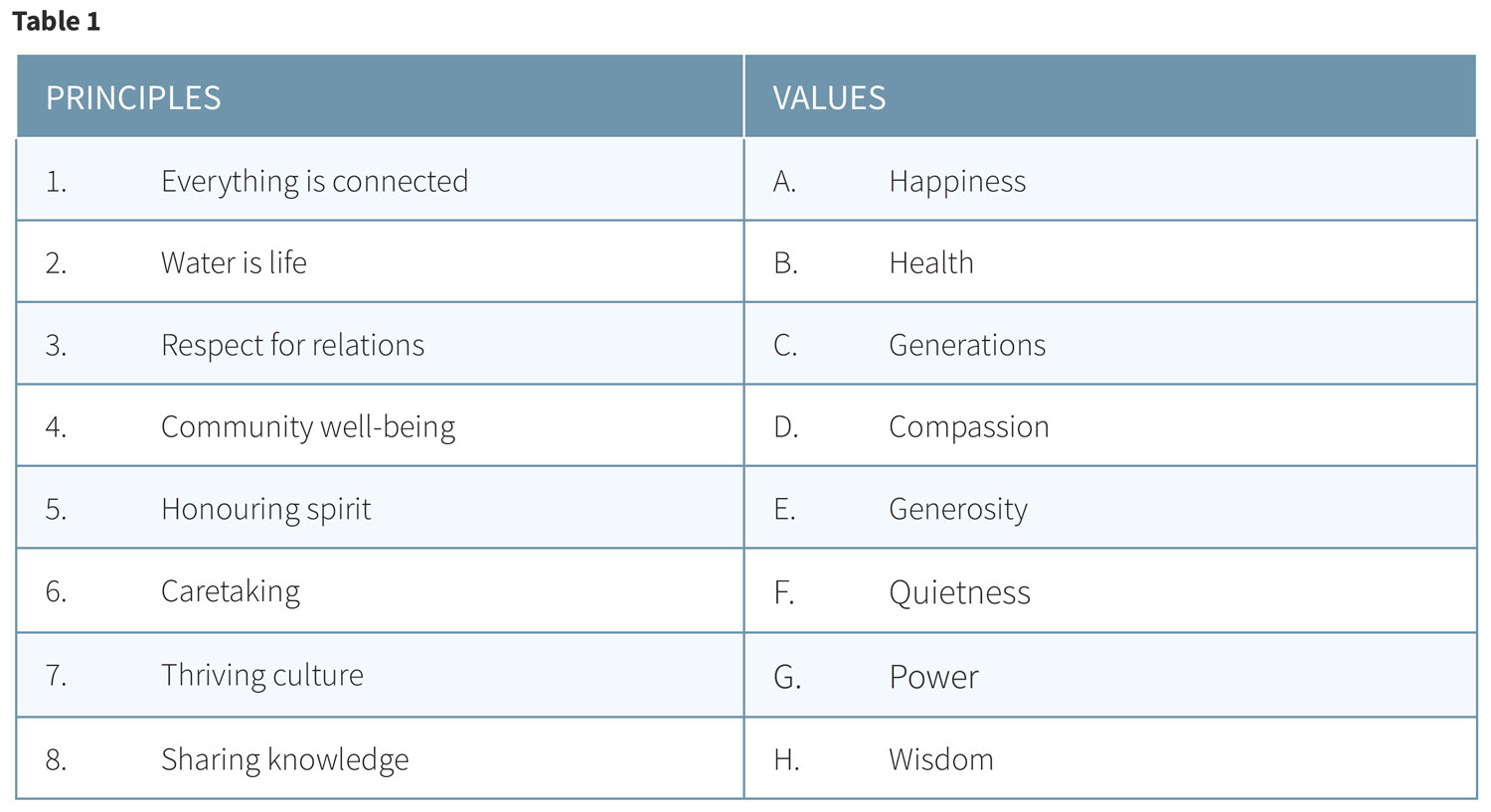 These columns have different colours than the other tables as they are simply there for reference and are not meant to be part of any direct horizontal comparison.

There doesn’t necessarily need to be the same number of each column. You may have far more principles than values and that’s fine. The numbers also don’t represent any ranking or hierarchy. The purpose here is to allow them to be easily referenced. 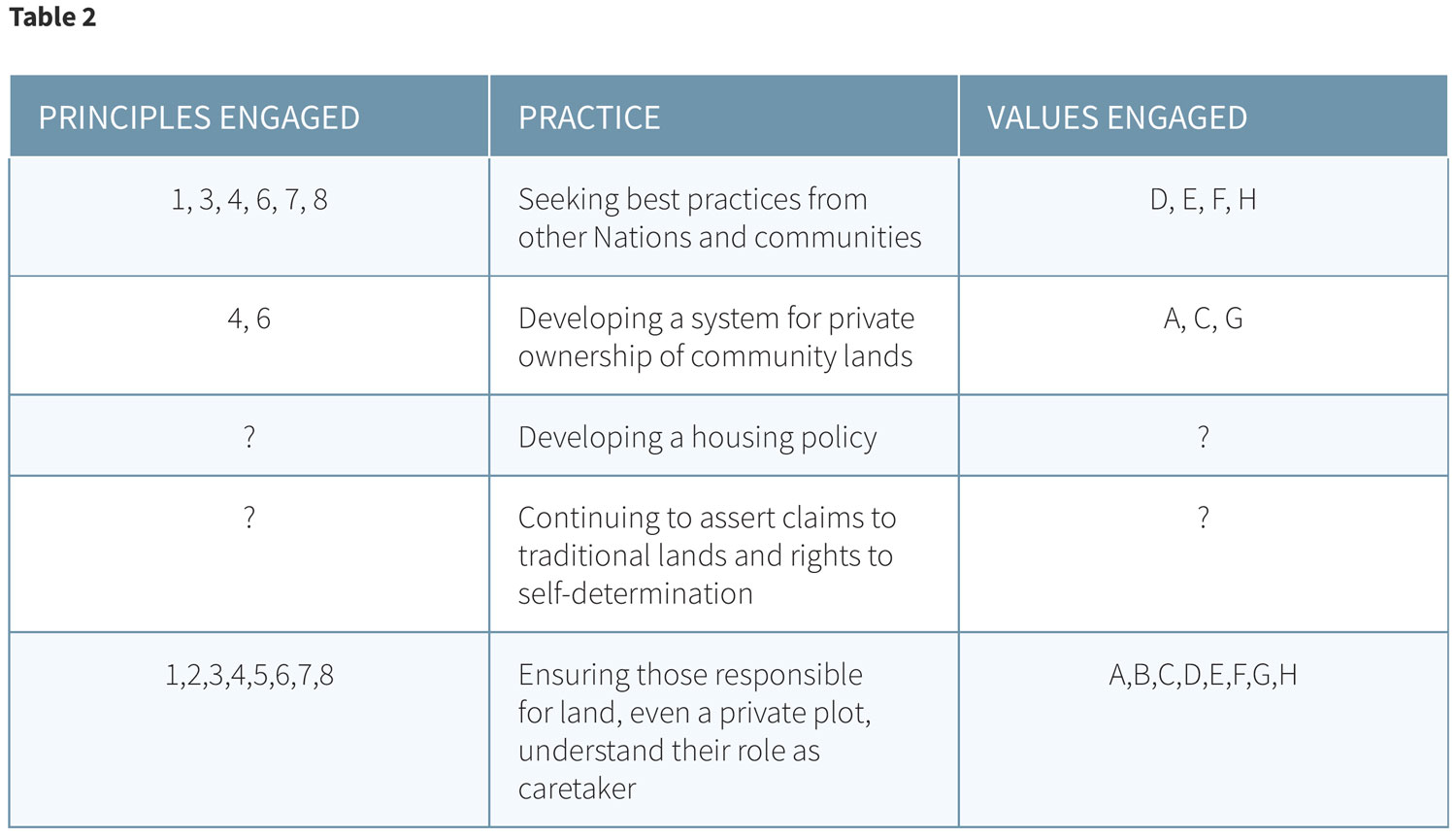 Depending on your purposes, you might find it sufficient to stop for now at the previous stage. However, if you want to consider certain policies, practices, or proposals in light of your values and principles, we can now begin to build out our table a little more, highlighting practices in the centre with columns for the values and principles engaged on either side, as in the example Table 2.

Your table could focus on any number or breadth of topics with the centre column being filled out with any policies, practices, or concerns that you and your group wish to consider.

The example table takes the focus on housing and lands.

Once you’ve listed some of the key practices that you’d like to consider as relevant to your chosen topic area, you can now begin to consider which values and principles are at the core of the practice. As in Table 2, place columns left and right of the practice so that you can demonstrate the relationship of values of principles to the practice by using their corresponding letters and numbers as shorthand.

In considering which values and principles are engaged, just know that this isn’t the kind of thing that will produce clear-cut results. Some values or principles may be involved tangentially, and you just need to discuss and use your best intuition and discretion. In the example above, in the first row, ‘seeking best practices from other communities’ may result in health and happiness for the community but they weren’t included in the example as they aren’t directly engaged in the activity of seeking itself. With a bit of work, we could likely find connections between most values and principles, so use your discretion in deciding what is engaged directly by the practice and what may be secondary or a separate outcome.

The rows with question marks in Table 2 are left blank so that you can practice considering for yourself which values and principles from our example Table 1 you think would be engaged by those practices.

The evaluation phase in F. (above) is another point where you may find you’ve gone as far as you need. You can now hopefully see more clearly which aspects of your focus engage the community’s core values and principles most. This process may help in deciding which path forward is preferable.

In the example table (above) for instance, developing a system for private ownership of lands may be understood to be in pursuit of happiness, allowing for inheritance between generations, and increasing individual autonomy and power over one’s own home.

In terms of principles, this practice could be seen to be facilitating community well-being and encouraging caretaking through responsibility in individual ownership. In contrast, the individual nature of the property seems not in line with the spirit of principles like ‘everything is connected’ or ‘sharing knowledge’. This isn’t necessarily a bad thing, but it allows us to consider if certain principles or values not being engaged is an area of concern.

Ensuring community members understand their role as caretaker, however, seemingly engages all principles and values and immediately identifies itself as perhaps a preferable practice to include in the overall work of community housing.

If you’re engaging in a lot of comparison between various practice options, another layer of structure may be warranted. Table 3 (below) builds on the previous one by adding another column, distinguishing traditional and novel practices, and another principle column for analyzing those additional practices.

In this arrangement, the example contrast of traditional practices and novel practices is used, though each column could just as easily be two different policy proposals of any kind.

The practices in this context are aligned horizontally according to historic and modern versions of the same general kind of practice, separated into how it may have been/is being done traditionally and a proposed novel practice. 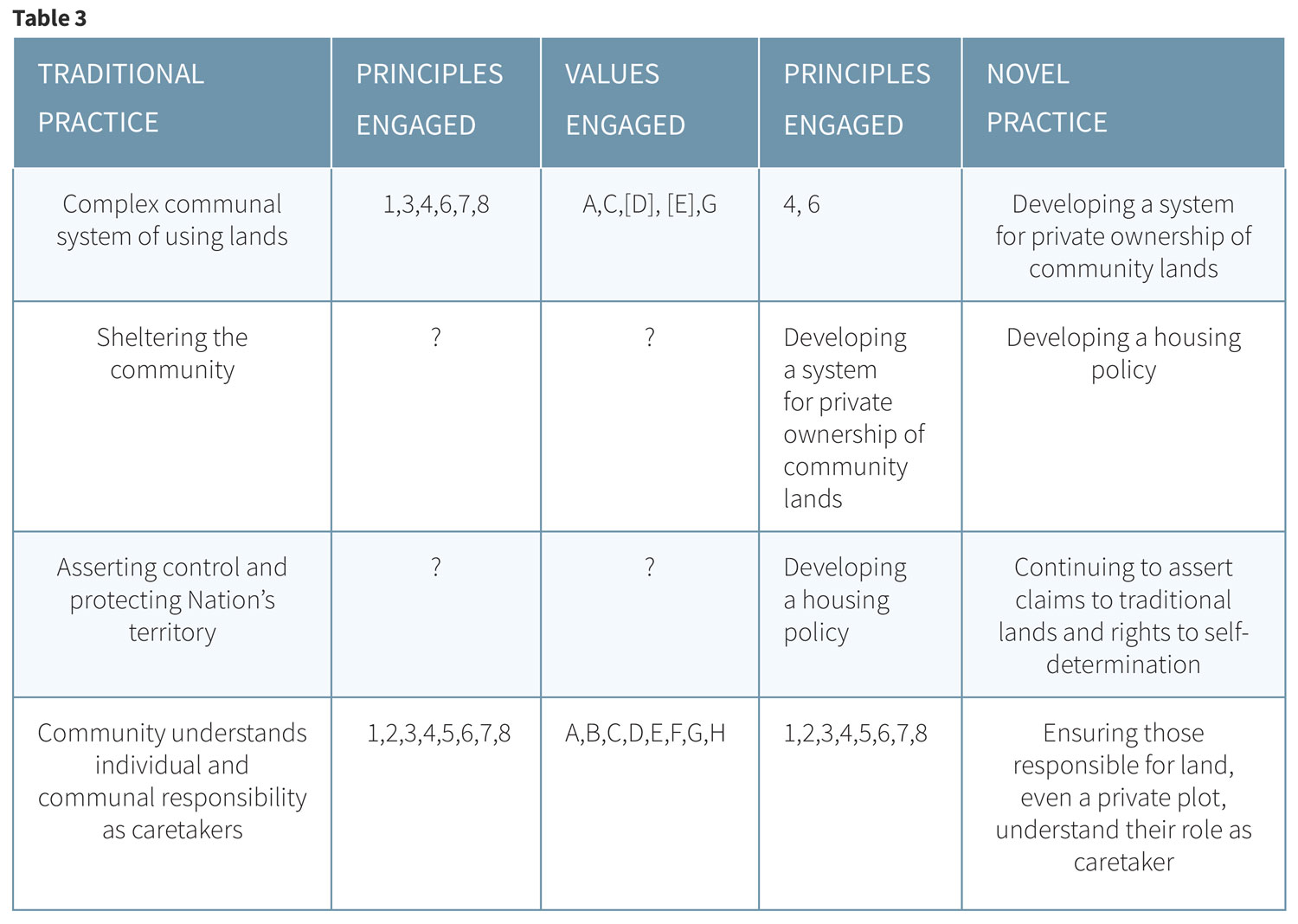 This arrangement allows for a direct compare-and-contrast regarding the principles and values that each engages. It becomes evident which traditions are largely unchanged or remain very consistent over time, and which are seeing significant change and transition. In the first row of Table 3 for instance, regarding land use, there is an obvious and significant change in the principles engaged as between private or communal land uses. Even at the level of core values, the letters in brackets are identified as even those core values are not present in both practices and signify a fundamental shift.