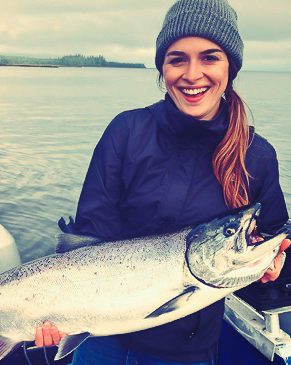 Born and raised in Edmonton, Alberta, Gen made her way to the West Coast after wrapping up a Bachelor of Arts in Environmental Tourism and Recreation from the University of Alberta in 2011. After completing an internship in Brazil working on coral reef conservation and monitoring, Gen moved to BC and worked on various Canadian fishing resorts, which subsequently led to a 3-year travel and volunteering stint around New Zealand, Australia, Southeast Asia, and Hawaii. Upon her return, she decided to move to northern BC to chase her dreams; pursue an education and career in marine ecology and conservation.

With a newly acquired diploma in Applied Coastal Ecology, Gen is now focusing her attention to the second portion of her goal. After working a season as a guide and naturalist in the Khutzeymateen Grizzly Bear Sanctuary, she shifted her attention toward learning the trades of the sea as a deckhand, and is now currently working on obtaining her Master Limited 60GT while concurrently operating as a Video and Data Analyst for Ecotrust Canada.